Team White Hold On to Beat Team Black in Class of 2018 Game - Hoopsfix.com 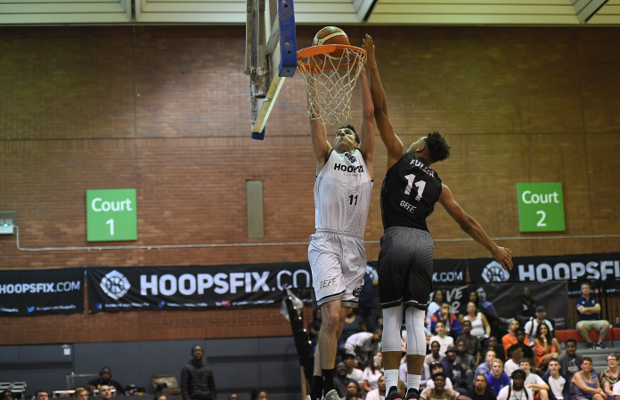 Team White claimed victory in the Class of 2018 Game at the Hoopsfix All-Star Classic after edging out Team Black 85-88 in Brixton, on Saturday afternoon.

Brian Amabilino-Perez led the way with a double-double of 20 points and 10 rebounds to take the MVP award, whilst producing the highlight of the game with the second of two poster dunks.

Sesan Russell added 19 points in the win for Team White including a pair of clutch free throws down the stretch to leave the opposition needing a three for overtime and Josh Edwards’ effort rimmed out at the buzzer.

Jesse Sazant’s Team Black made the brighter start to lead 17-9 behind seven points from Eisley Swaine before Cameron Bett capped a 7-2 response with a three to end the first quarter with his side trailing, 19-16.

A high-scoring second quarter followed as the two teams went back and forth. Caleb Fuller had the final say as his basket put Team Black up 44-42 at the half-time break.

The lead grew to seven at 56-49 nearing the mid-point before Russell fired in back-to-back threes to spark an 11-0 run to push Team White ahead.

However, the two teams would go into the final quarter level at 62-62 to leave the contest evenly poised with the intensity picking up at both ends.

Amabilino-Perez began to make his mark with eight points including a huge throwdown to send the sell-out crowd wild at Brixton Rec. Micheal Anumba and Edwards – who combined for 39 points – kept their side in contention with the game still tied at 76-76 with 3:46 remaining.

Sean Nealon-Lino connected with a big three for Team White and Amabilino-Perez followed suit to make it 78-84 inside the final two minutes.

Mark Jarram’s side were up five in the final minute, but a dramatic four-point play from Edwards provided a thrilling finish with Team Black down 85-86 with 15.1 seconds left on the clock.

Russell held his nerve from the foul line and it would be enough to ice the win for Team White.

You can catch highlights of the Class of 2018 Game on FreeSports TV on Tuesday night, at 9pm.

The game will soon be available to watch in full on the Hoopsfix channel on YouTube.