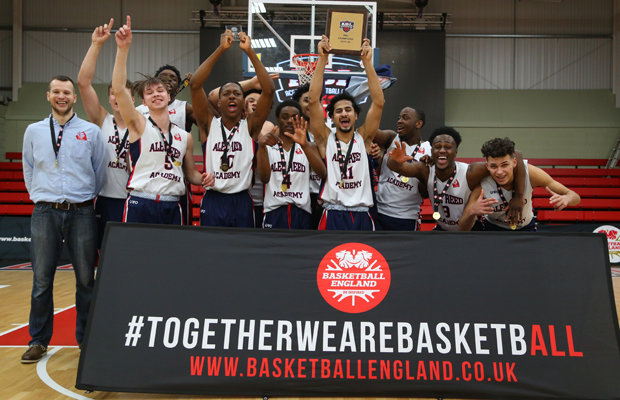 Alec Reed Academy claimed the 2018 ABL Championship title with a 90-87 victory over Stoke on Trent College in Leicester, on Thursday.

Victor Olarerin earned MVP honours with a 27-point haul along with 9 rebounds in the win including a huge dunk in the second half in helping his side pull away.

“”We are here for a reason,” he declared. “We must be a good team so why don’t we go out show it and there you go we’re champions!”

“It feels phenomenal, after so many ups and down,” said Alec Read Head Coach Daniel Szatkowski. “After coming out with such a close win, so many dunks and three pointers, it is probably the best way to win it.”

Stoke poured in 28 points in the opening period as they built an early lead before Alec Reed battled back in the second as they outscored their opponents by 12 in the quarter.

Central Conference Player of the Year Afra Khalil beat the half-time buzzer from half-court to send Alec Reed into the break with a 42-48 advantage.

The lead grew early in the third, but Stoke recovered to edge the quarter as they reduced the deficit ahead of the final 10 minutes. A 16-2 run helped Alec Reed pull away to a 63-80 lead at the midpoint in the fourth and despite a late revival from Stoke, they held on for the win.

Stoke Head Coach Shawn Jamison said: “We just had a major let down in the second quarter.

“We got down and we tried to recover but it was too little too late, I’m proud of the guys, they fought hard all year, we just came up short and that’s basketball. All Credit to Alec Reed and we wish them the best of luck.”

Jara led Stoke with 22 points with Luke Webster-Smith adding 18 and Theo Jarret had 17 as their late fightback came up just short in defeat.