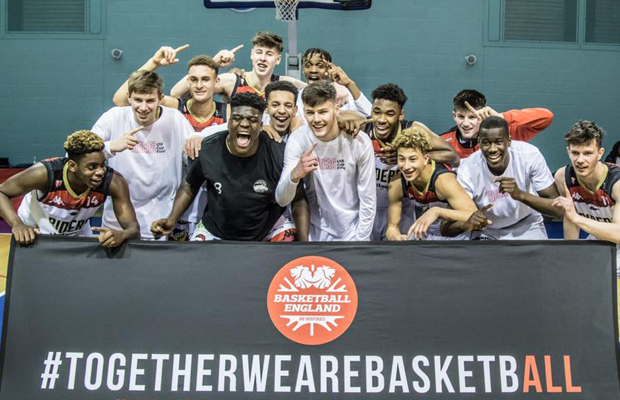 Behind a dominant performance from Hosana Kitenge, Charnwood College Riders claimed the 2018 Under-18 National Cup with a 89-59 win over Manchester Magic on Saturday at Worcester Arena.

Kitenge went off for 24 points, 13 rebounds, 3 assists and 5 blocks on 10-for-16 shooting as Charnwood faced little resistance after pulling away in the second period.

Zak-Blue Shagourie added 16 points in 16 minutes for Charnwood, with Blaize Sagna having 11 and David Likinyo 10.

“It was an amazing day for our boys,” Charnwood Head Coach Will Maynard commented. “Credit to all of them for how they played on the day, we had contributions from all 12 players!

“We had a game plan coming into the game and all of the boys brought in to what we wanted to do. Defensively we were really good especially on key players, holding them in the twenties at half time. Everyone stuck together throughout the course of the day, and brought the energy for the whole days which aided our performance too.”

“This weekend our team showed the level we could compete at and the standard of play we are capable of playing at. To lose to this team by 2 in double overtime was very tough for us but we used it as motivation to overcome them this time by 30 points.

“Manchester were a great team and put up a great fight but we knew from the start what we wanted to achieve and knew what it took to get there. Now we focus on the rest of the regular season and the playoffs and continue to grow every day as a team and learn from the moment and continue to move forward as one.”

Manchester were led by 18 points from Arinze Emeka-Anyakwo, whilst Michael Anumba was the only other player in double figures with 14 points and 8 rebounds.

After trading early exchanges, Charnwood used a 6-0 run to gain an advantage with a minute remaining in the first.

The second quarter was all one-way traffic, as Charnwood began to find their rhythm, using a 15-0 run sparked by the play of Kitenge to pull away. A Kitenge three with 2:33 left in the second saw Charnwood’s lead extend to 20 for a comfortable cushion.

A 9-0 Charnwood run to open the third quarter made matters worse for Manchester, as the lead reached 30 dampening any hopes of a comeback.

A minute into the fourth quarter and the lead had increased to 40, and despite Manchester fighting back in the fourth, it was too little, too late.