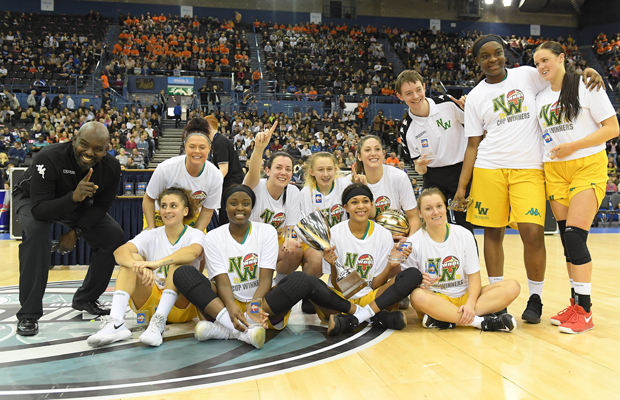 Nottingham Wildcats edged out Caledonia Pride in a thrilling Cup Final in front of a record WBBL crowd at Arena Birmingham on Sunday.

The Wildcats put last year’s disappointment behind them as they held on down the stretch as Pride made a late fightback. Nottingham pulled away at the start of the third after a back and forth first half, before coming through a late scare.

Ashley Harris claimed MVP honours with 19 points and nine rebounds, while Onayssa S’Bahi handed out an impressive 14 of Nottingham’s 24 assists with Aleysha Lovett (18) and Lana Doran (11) also in double figures with important scores in the second half.

“It was a really great game and Caledonia pushed us all the way, Bart [Sengers] and his players really fought well,” Wildcats Head Coach Dave Greenaway said. “At times we had control of the game but our inconsistencies also came up again. Credit to our players though as in the end, we did what we needed to do.”

MVP, Ashley Harris added: “Everyone stepped up today for us and we had a lot of contributions. We got stops when we needed to and full credit to Caledonia who came and fought very well.”

For Pride, Tricia Oakes had 16, whilst Hannah Robb and Rosanna Reynolds added 10-a-piece.

“Congratulations to the Wildcats, they deserved the win today and the better team won,” Pride Head coach, Bart Sengers said. “I am proud of our team as they fought really well.”