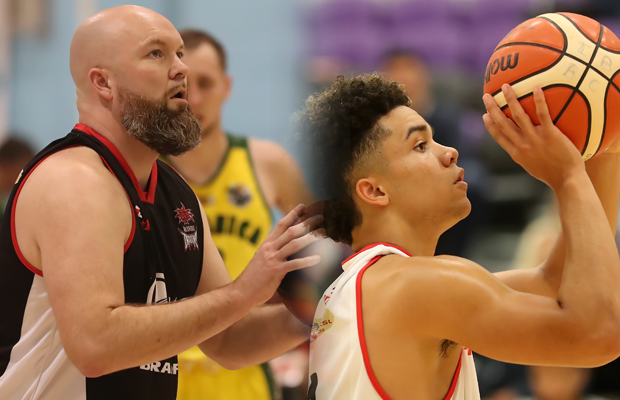 This is a guest contribution from writer Samuel Bennett.

For any basketball fan in the year 2017, the mention of a father and son basketball duo would instantly conjure up thoughts of the much-discussed Los Angeles Laker Lonzo Ball, and his outspoken father Lavar.

But on our own shores and away from all the hoopla, there is a father-son combo making headway for themselves – without the controversial antics of Lavar and his sons.

The younger Swaine has been one to watch for several years now, making the Basketball England U17s squad and twice attending the prestigious DENG Camp, an invitation-only training camp put on by British NBA star Luol Deng each summer for the top 50 young talents in UK basketball, not to mention making Hoopsfix’s very own All-Star Classic in 2016 for the top twenty Under-17s in the country.

Attention from overseas has followed.

“From the start of being recruited, the coach (of Northwestern, Shawn Dirden) was very forward and he came across as a really good guy,” Eisley says.

“I spoke to my dad a lot about it because he plays a big part in a lot of the things I do and I have a lot of respect for him, and he advised me a lot throughout the process. He has a lot of experience in the game, he’s worked with a lot of people and obviously I’m only young. But even though he helped me a lot, he didn’t take control, he still let me make my own decision.

“From the start I was treated well by the coach at Northwestern, I felt wanted, and I just feel like it was the right situation for me.”

Now 41, Jason is in the latter stages of his illustrious career, during which he represented England on the international stage more than 25 times (including at two FIBA European Championships), and won the BBL League Trophy with the Sheffield Sharks in 1999, and he left the Dragons at the end of last season, the club where Eisley has made his name.

This crossing of paths, with Jason in the twilight of his playing days and Eisley at the beginning of his, allowed the pair to become the first NBL father and son duo to take the court together, a special moment for Jason.

“It’s a massive deal for me,” Jason continued.

“I always say the best three years of my basketball career, or my basketball life, no question was being able to play on the same team with him at Bradford Dragons. I think it’s really cool that we both played genuinely big roles, with a lot of playing time, at a good level like we did, because there’s not many fathers that can say they got to have that experience in any sport.”

And like any good father, Jason has tried to pass on to his son some of the knowledge he gained during his 20 year basketball career.

“Physically, we’re slightly different as players, but I feel like mentally the mindset of always wanting to get better, always being focused out there and staying a play ahead, is something that he’s taught me from a really young age,” said Eisley.

“Eisley is a totally different player than I am, and a much better player than I am now. He has the same sort of feel for the game that I have, but I think with a lot of kids, the mindset of being able to take criticism and the challenges put in front of you and the need to stay confident, I continue to ask that of him.

“A lot of young kids are missing that today, and as a culture we are a bit soft. That’s the main thing I hopefully have passed on to him, and that’s not so much basketball related than it is just life.”

@eisley8 takes some ankles before splashing the three on his way to a 42-6-7 line in the ABL! 🔥🇬🇧🏀#Hoopsfix


And having experienced so much through his storied career, Jason was also in a position to help advise Eisley on his decision to play overseas.

“The decision to be able to commit this early was a big thing. I knew the coach through a few people, and that meant I could sort of assess Eisley’s situation there and the sort of people he was going to be dealing with, and that was a good thing.

“We were able to assess a lot of different schools and speak to a lot of coaches and think really deeply into it. We thought at the end of the day the situation at Northwestern was a good fit and we didn’t want to turn that down, so I’m more than happy with him going there.”

Eisley will play out the remainder of the season in the UK, playing for the Dragons in NBL D1 as well as ABL side Queen Ethelburga’s College in York, before joining up with the NWOSU Rangers in the summer of 2018, and he is understandably eager to get started.

“I’m just looking forward to the change, I think it’s a big step and its always been a dream of mine”, the 6”3 guard said.

“I can’t wait to go out there and meet the competition head on, to play hard and just compete every single day, work on my skills and improve. Hopefully I can come out of it individually as a better player, but I just want to help the team.

“The coach is very positive and I feel like once I’m out there and I can get used to the style of play, my teammates and just get to grips with everything, I can really start to improve and we can compete with the teams around us. The coach is talking about championships and it’s something I really hope we can do.”

Jason, who has now turned his attention to Masters’ basketball, is far too humble to make any brazen, Lavar Ball-like predictions that have got his son Lonzo into so much trouble over in Los Angeles. Instead, his focus for Eisley is much more simple.

“I just hope he lives his dream really, like any parent should want for their kids, just to do what he wants to do and be successful and just keep the same character that he’s always had.

“It’s tough being placed in such a different situation, it’s easy to change at times because people are easily swayed, but I just want him to get the best out of his life really.”