Around the NBL Recaps - Week 12 - Hoopsfix.com

Around the NBL Recaps – Week 12 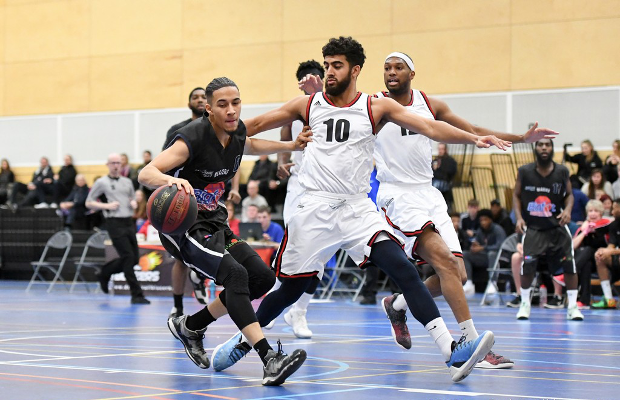 Worthing moved to a 6-3 record after holding off Bradford in a six-point win to start the weekend’s action.

The home side trailed by three with 10 minutes remaining before pulling away with a 25-16 fourth quarter including a pivotal 8-0 run.

Marcus Gooding put up 23 points for the Dragons as they came up short in defeat.

Loughborough remain on top of D1 after a strong third quarter display set up a 13-point road win away at Hemel.

The Riders came out firing in the second half with a 15-25 third with the two sides having been level at the half-time break.

Morgan Carter led the way with 21 points for the league leaders, while Storm were paced by 13 points apiece from Bode Adeluola and Lee Greenan.

Hemel drop to a 7-3 record having missed the chance to move into top spot.

Manchester ended a run of three straight defeats with a comfortable road victory at winless Lancashire.

Donte Gittens had a game-high 26 points in the win along with nine rebounds and four assists with Kayin Darbey adding 14 points.

Magic only led by four at the end of the third before producing a dominant finish to close out the win.

Loick Pouale top scored for the Spinners with 23 points in their 10th straight loss.

Newcastle came out on top in the battle of the promoted sides with a comfortable home success against Kent.

The home side started with a 27-10 opening period and never looked back as they claimed their fourth win of D1.

Jack Beresford top scored in the win with 19 points, while the visitors were led by Dwayne Orija’s 15 points.

Solent started strong as they claimed a 14-point home win over Bradford on Sunday to keep hold of second spot.

The Kestrels dominated the first half to lead 49-27 and wrapped up the win, despite a 32-point third quarter effort from the visitors.

Joe Tagarelli led the way with 25 points and 12 rebounds, while Herm Senor dished out an impressive 16 assists to go with 15 points in the win.

The Dragons had five players in double figures as they dropped their second game on the road of the weekend.

Derby brushed aside an 0-4 month in November as they bounced back with a convincing home win over Northumbria.

The Trailblazers led by just two points at the end of the third, but put together a dominant 26-12 final period to close out the win.

Malcolm Smith poured in 25 points for Northumbria with 13-15 from the free throw line, while Blayne Freckleton and Danny Horta had 17 points apiece.

Reading are just a win behind the D1 league leaders after overcoming Leicester Warriors for a five-point home win.

Declan Soukup top scored with 19 points on 5-of-5 shooting, while Tim Gill had 13 points and 14 rebounds with five players in double figures for the Rockets.

The game was tied at the half before Reading pushed ahead with a 25-15 third period and were able to hold on in the fourth for the victory.

Rodney Sanders had a team-high 19 points for the Warriors as they remain second from bottom in D1 – a win behind three teams above them.

Ipswich (5-4) climbed into joint-third with an 87-104 victory away at Sussex Bears (4-5) as Ryan Wilson – who has had spells in the BBL at Sheffield Sharks and Manchester Giants this season – netted 26 points.

Myerscough College (6-1) lead the way in D3 North after easing to a 50-77 win away at second-placed Loughborough Student Riders II (5-3) with 33 points from Edoardo Del Cadia and a further 25 for Konrad Kantorski.

Meanwhile, Worcester Wolves II (3-3) defeated Birmingham Mets (3-6) 76-90 on the road and Manchester Giants II (2-6) doubled their win tally in the league with a convincing 95-63 win over Sheffield Hallam Sharks (4-5) having put up 34 points in the second period.

Just behind are Greenwich Titans (6-3) with an 85-93 victory away at Cardiff Met Archers (3-5) maintaining the pressure as Ray Akpofure netted 32 points, while Swindon Shock (2-4) picked up their second win with an 88-84 triumph over Cardiff City (5-4).

With the league leaders not in action, City of Birmingham Rockets (7-2) and Northants Thunder (7-2) both enjoyed double-winning weekends to keep up the pressure.

Derby bounced back from their third defeat with a comfortable 93-62 win against Nottingham Hoods II (2-7) with Shropshire Warriors (4-6) another team to win 2/2 on the weekend as they defeated Birmingham Mets II (2-7) 67-56 and Mansfield Giants (2-6) 66-76 with Simon Hoar putting up 29 points in the road success.

Also, Birmingham responded from their opening loss of the weekend by picking up their second win of the league campaign as they saw off Nottingham Trent University Hoods (2-7) 75-65, who had beaten Warwickshire 95-84 the day before.

BC Medelynas London (7-0) saw their lead at the top strengthened after crushing Folkestone Saints (3-5) 126-60, while Barking Abbey Crusaders (7-2) fell to a 75-69 loss against Kent Crusaders II (4-3) with the hosts dominating the final period.

Taunton Tigers (7-0) maintained their unbeaten record with an 83-67 win at home to Thames Valley Cavaliers II (3-6) with London United (5-2) improving their record after beating Surrey Rams (1-5) 87-76, despite 25 points from Jacob Loveridge.