Around the NBL Recaps - Week 10 - Hoopsfix.com

Around the NBL Recaps – Week 10 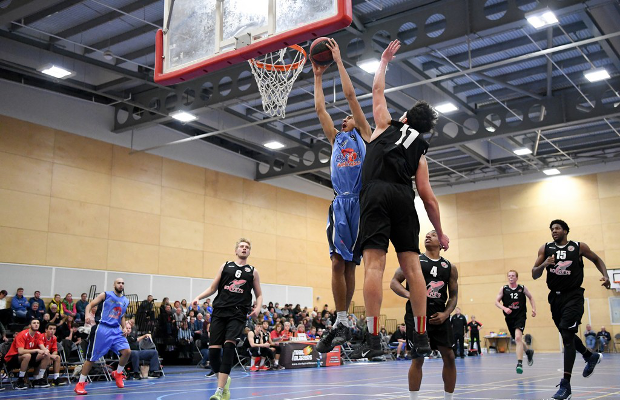 A recap of the tenth week of the 2017-18 National Basketball League (NBL) season.

Hemel are now the front-runners in D1 after recording an impressive win away at Manchester.

The visitors pulled away in the second quarter and completed a convincing victory with a strong second-half display.

AJ Roberts starred with 29 points along with seven rebounds and five assists, while three other starters hit double figures in the win.

Magic were led by Donte Gittens’ 28-point haul, but they fell to their second league loss of the season.

Reading kept pace with the league leaders as they earned a 16-point road win against the Trailblazers.

Tim Gill put up 22 points and 17 rebounds for the Rockets with 17 points for Sydney Donaldson, while Jerrod Hendricks handed out 11 assists to go with 14 points and five steals in the win.

The visitors edged the two opening periods to lead by five at the break before pulling away behind a 13-23 third quarter.

Derby had 17 points from Simeon Esprit with Matthew Ward-Hibbert also adding 16 points as the duo combined for 33 from the bench.

Northumbria fell to another loss in the league as they went down away from home against Worthing Thunder.

Zaire Taylor poured in 36 points to guide his side to victory as they move to .500 with Jorge Ebanks adding a further 18 points.

After an even 22-22 opening period, Thunder raced away to a double-digit half-time advantage and were able to secure their third league win.

Malcolm Smith had 32 points and 14 rebounds in defeat for Northumbria with Jack Preston also posting a double-double with 13 points and 10 boards.

Solent bounced back from their previous defeat as they recorded a 13-point road win against Kent Crusaders.

Joe Tagarelli led the way with 23 points and 12 rebounds in the win with Elliot Dadds adding 16 points as the only other player in double figures for the visitors.

Solent dominated the first half to lead 30-52 at the break and despite a valiant response from the Crusaders, they still fell comfortably short.

Caleb Fuller had 16 points and eight rebounds for Kent as they drop below .500 in eighth place.

Team Newcastle put their poor run of league form behind them to pull out a narrow win on the road on Saturday.

Joey Bennett top scored with 21 points with Fran Urli adding 19 for their side’s second league win of the campaign.

Bradford Dragons squandered a 30-10 first quarter advantage with a biggest lead of 22 in the contest as Newcastle rallied with a 27-41 second half effort.

Ricky Fetske and Marcus Gooding had 18 each for the Dragons with Urli’s late three proving to be the dagger in the final minute.

Nottingham Hoods (7-0) continued their winning run in D2 with a 59-76 win away at Middlesex LTBC (2-5) on Sunday. T Robinson led the way with 22 points with Modestas Kraskauskas netting a game-high 27 points in defeat.

Essex Leopards (3-2) bounced back with a 94-80 victory over Ipswich (3-4) in overtime after the visitors had produced a 12-27 final quarter to force an extra period. Dougie Bennett and Korry Callum pushed the home side with 17 and 15 points respectively.

Meanwhile, Liverpool (5-2) powered past Westminster Warriors (4-4) in the second half for a 69-75 road triumph behind 25 points from David Ulph.

Thames Valley Cavaliers (5-2) are level in second with Liverpool as they secured a 74-88 win away at London Westside (1-4), while Team Birmingham Elite were also victorious away from home after beating Sussex Bears (4-3) 63-76 with a 13-31 fourth quarter.

Derbyshire Arrows (2-4) picked up their second win in the league as Joseph Baugh’s 22 points helped secure an 89-62 success at home to London Greenhouse Pioneers (1-6).

Doncaster Danum Eagles (3-4) were victorious at home as Matthew Martin fired in 31 points to lead his side past Stoke-on-Trent Knights (3-3).

Elsewhere, Birmingham Mets (3-4) edged out Team Sunderland (3-4) 84-81 with 24 points for Daniel Belgrave, while University of Chester (4-3) secured an 84-75 win over Sheffield Hallam Sharks (4-3) as Phil Brandreth poured in 35 points to counter a 27-point haul from Jacob Cauthorn.

Greenwich Titans (4-3) came out on top in a high-scoring thriller against Cardiff City (4-3) as they prevailed 116-107 in overtime. The visitors rallied from 15 down at the end of the third to force an extra period with Lewis Tucker netting 36 points in defeat.

Blackpool (7-1) opened the weekend with an 82-87 victory away at Kingston Panthers (6-2) with 25 points each from Chris Hodkin and Aitor Estrada.

Derby Trailblazers II (7-0) continued their winning start on Sunday as Jake Wesselingh netted 25 points in an 87-68 win at home to Warwickshire Hawks (4-3).

The unbeaten start of Barking Abbey Crusaders (6-1) was ended on Saturday as BC Medelynas London (5-0) recorded an 88-79 home triumph.

Third-placed Chelmsford Lions (4-2) were beaten 81-88 at home to Richmond Knights (3-3) with Andrew Wallace netting a game-high 31 points for the visitors.

Taunton Tigers (5-0) maintained their perfect record in D4 South-West action with an 72-64 victory over Southampton University Sharks (4-4), while Bristol Academy Flyers II (5-1) kept up the pressure by beating RCT Gladiators (3-3) 70-88 on the road.

Four remain in the National Cup following the last eight action over the weekend.

Manchester Magic remain on course for another final appearance after they saw off Newcastle University 67-57 and face a trip to Solent Kestrels next after they earned a convincing 89-67 success over Reading Rockets with 18 points apiece for Herm Senor and Joe Tagarelli.

Hemel Storm edged out Thames Valley Cavaliers 89-91 on the road, despite 30 points for Martelle McLemore, with Dave Ajumobi netting an incredible-game-winner, while Loughborough Student Riders overcame Bradford Dragons for a 79-76 victory.

Final moments at Uxbridge tonight. Scores tied at 89 all when this happens @ajukobe pic.twitter.com/XUaNIZ7Xca

Semi-Finals to be played 10 December