Around the NBL Recaps - Week 9 - Hoopsfix.com

Around the NBL Recaps – Week 9 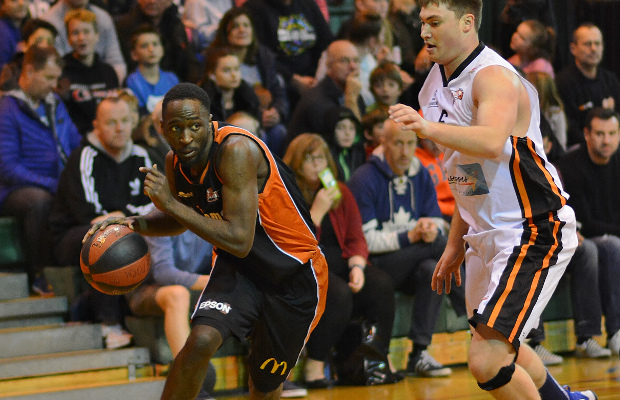 A recap of the ninth week of the 2017-18 National Basketball League (NBL) season.

The Warriors picked up their second league win of the season after overcoming Kent on Saturday.

Leicester raced into an early 28-14 lead and poured in 31 points in the third quarter to consolidate their control before completing a 16-point victory.

Theo Hughes and Sean Nealon-Lino both had 14 points apiece for the Crusaders.

In a top-of-the-table clash, Loughborough came out on top to improve to a 5-1 league record in D1.

The home side opened with an 18-11 first quarter and never looked back, taking the remaining periods to win by a comfortable 19-point margin.

Lucien Christofis top scored with 19 points with Sesan Russell adding 18 off the bench with Loughborough netting 15 triples in the contest.

Newcastle University won three of the four quarters, but were left to rue a costly first as they fell to Magic.

The home side trailed 12-23 after 10 minutes, and despite taking the lead following a second-half fightback, they came up short as Hamad Ali stole the win with a late three-point play.

Kingsley Pinda netted 23 points for Newcastle in defeat, while the visitors had 20 points, eight rebounds and six assists from Donte Gittens.

Stefan Gill added 17 points with Michael Anumba putting up 16 on 6-of-8 shooting inside the arc.

Northumbria bounced back from their first defeat with an emphatic 35-point win on the road.

Marc Steutel’s side led by 14 by the end of the opening quarter and never looked back as they picked up their third league win.

Blayne Freckleton and Jack Preston led a balanced attack with 13 points each with four other players hitting double figures for the visitors.

Once again, Loick Pouale top scored for the Spinners with 24 points including 5-of-10 shooting from downtown.

Manchester moved into joint first position in D1 after overcoming Northumbria in a game marred by six ejections.

The home side lost Stefan Gill and Ryan Lewis to an incident late in the first quarter with Lewis Champion, Malcolm Smith, Jack Preston and Tom Devitt all given disqualifying fouls for the visitors.

Magic missed four straight free throws to leave the game heading into overtime at 66-66 before taking the win with a 15-10 extra period.

Michael Anumba led the way with 23 points and 14 rebounds with Donte Gittens contributing 18 points, 10 rebounds and seven assists as both played the full 45 minutes.

For Northumbria, Danny Horta top scored with 22 points off the bench having lost four starters due to the early altercation.

The Rockets also got back onto the winning trail as they eased to a 21-point home success on Sunday.

Reading saw their unbeaten start end last week, but were quick out of the blocks with a 24-12 opening and poured in 53 points in the second half to power to victory.

Sydney Donaldson had a game-high 22 points in the win with Tim Gill close behind on 21 points along with 12 rebounds.

Rafi Saipe played the entire game for the Dragons and finished with 21 points as they drop to .500 in the league campaign.

Hemel prevailed in a thrilling contest to stay amongst the leaders in D1.

Down six with less than two minutes remaining, Storm hit consecutive threes before Wayne Yeboah drove to the basket to give his side the lead.

The visitors missed the chance to tie the game from the line and Hemel were able to hold on for the win.

David Ajumobi led the way with a 27-point haul with AJ Roberts and Yeboah both adding 14 points.

The league leaders, Nottingham Hoods (6-0) are still unbeaten as they claimed their sixth straight win with a 71-88 success away at London Greenhouse Pioneers (1-5) with a dominant 28-44 second half display.

Sussex Bears (4-2) started the weekend as Bud Johnston scored 20 points in a 79-70 win against Derbyshire with the visitors led by Joseph Baugh’s 27 points.

Myerscough College (4-1) are the leaders in D3 North after a convincing 96-53 success over University of Chester (3-3) with Konrad Kantorski top scoring with 18 points.

Greenwich Titans (3-3) levelled their record with a 76-82 success at Southwark Pride (0-5) as Yassin Bouraidah netted a game-high 32 points.

Greg Pearson scored 30 points to lead Tameside (3-2) to a 79-82 triumph on the road against Newcastle Eagles U23 (3-3), while Kingston Panthers also won away from home, beating Stockport Falcons 49-66.

Quarter-Finals to be played 14 January