Around the NBL Recaps - Week 8 - Hoopsfix.com

Around the NBL Recaps – Week 8 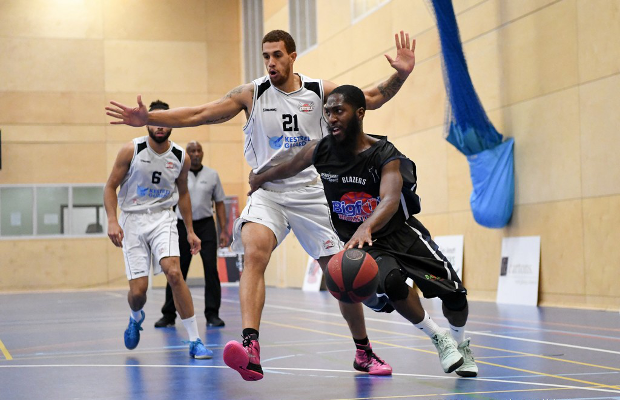 A recap of the eighth week of the 2017-18 National Basketball League (NBL) season.

The unbeaten start of Reading was ended on Saturday as Manchester claimed a five-point home victory.

Stefan Gill led Magic with a 21-point haul, while un-related namesake Tim Gill fired in 26 points along with 13 rebounds for the visitors.

Manchester had a narrow advantage at half-time before pulling away in the third to lead by 10 ahead of the final period.

The Rockets came up short to suffer their first loss of the campaign.

Ryan Lewis added 16 points with Donte Gittens handing out 12 assists to go with 15 points in the win.

Northumbria are also unbeaten no more as they fell to a 23-point loss at home to Hemel – who enjoyed a double-winning weekend.

The visitors raced out of the blocks with a 12-26 opening quarter and never looked back en route to the win.

Michael Darlow top scored for Hemel with 18 points with all five starters in double figures including Bode Adeluola who also dished out seven assists to go with 10 points.

For Northumbria, Siman Stewart had 16 points with Jack Preston adding 10 points and 10 rebounds.

Loughborough now sit top of D1 in a three-way tie after recording their fourth league win of the campaign.

Elliot Sentance netted a game-high 27 points for the visitors, but they were well beaten on the road.

The hosts established an 18-point advantage by half-time and produced a strong 26-10 finish to seal a comfortable victory.

Kent eased to their third win from five league games as they brushed aside the challenge of the Spinners.

The home side poured in 29 points in a dominant second quarter and held their opponents to just 20 points in the second half as they completed a convincing victory.

Caleb Fuller led a balanced attack with 18 points as all five starters reached double figures in the win.

Solent Kestrels recorded a hard-fought win on the road as they moved into joint-first position.

The visitors had 15 points from Herm Senor II with Joe Tagarelli adding 12 points and 13 rebounds in the win.

“At times tonight we looked great at both ends of the floor, but similar to the Newcastle game a shift defensively from the opposition really slowed us down,” said Kestrels Head Coach, Matt Guymon.

“Credit to the players as they were able to make big plays down the stretch that saw us over the line against a well coached team.”

Matthew Ward-Hibbert led Derby with 18 points as they came up short at the buzzer.

Zaire Taylor led the Thunder to their second league win with a 29-point haul.

Worthing’s 27-20 second period proved to be the difference as the visitors edged the second half.

Joey Bennett led Newcastle with 24 points, while Fran Urli had 20.

Both teams entered the contest 0-5, but it was Leicester who came out on top for their first league win of the season.

The winning margin was boosted as Leicester book-ended the game with 26-point quarters as the Spinners suffered yet another loss.

Reiss Haggith led the visitors with a 20-point haul.

Hemel completed a successful weekend in the North-East as they joined Loughborough and Solent at the top of D1.

The visitors battled back from 10 down in the first as they pulled away in the middle periods to lead by nine at the end of the third.

Bode Adeluola put up 24 points in the win along with six assists with Dave Ajumobi and Wayne Yeboah also in double figures.

Newcastle had 20 points from Joey Bennett as their slow start in the league continued.

Nottingham Hoods (5-0) made it five from five in D2 with a dominant 63-98 victory away at Derbyshire Arrows (1-2) after putting up 31 points in the opening period en route to the win.

The gap at the top was increased after Sussex Bears (3-2) fell to a 66-61 loss on the road against London London Westside (1-3) who ended their losing start to the campaign.

Three other teams are in joint-second after picking up away wins at the weekend including Thames Valley Cavaliers (3-2) with Martelle McLemore netting 28 points in an 87-99 success at Westminster Warriors (2-3).