Around the NBL Recaps - Week 7 - Hoopsfix.com

Around the NBL Recaps – Week 7 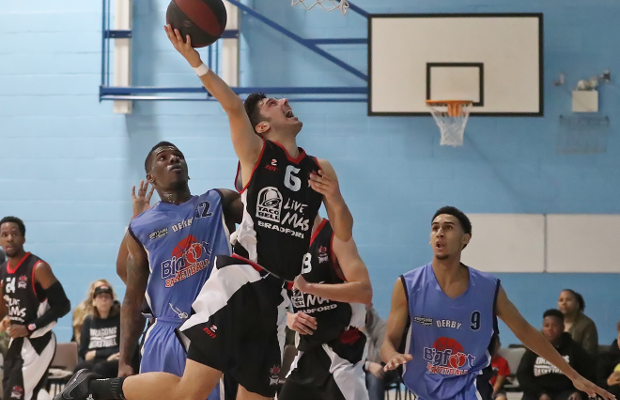 A recap of the seventh week of the 2017-18 National Basketball League (NBL) season.

Northumbria remain one of two unbeaten sides left in D1 after recording a 12-point win away at Newcastle University.

The visitors raced to victory in the second half, led by Malcolm Smith’s 22 points with Lewis Champion adding 19.

Newcastle had a half-time lead, but fell away after the break as they drop to a 1-4 record.

Reading continue to sit top of D1 after overcoming Worthing behind a dominant first-half effort.

The Rockets led 53-25 at the break and the margin was only reduced as the visitors put up 40 points in the final quarter.

For Thunder, Zaire Taylor netted a game-high 37 points as they fell to a second league defeat.

Loughborough picked up their third league win of the season after overcoming Kent away from home.

The visitors used a strong third quarter to pull away and held on to stay second in D1.

Dan Hemmingway and Sesan Russell led a balanced attack with 14 points apiece, while Kent were paced by Dwayne Orija’s 19 points.

Leicester were denied their first league win of the season after falling short at home to Derby.

The game was tied heading into the final period, but the Trailblazers managed to squeeze out the win after holding their opponents to single figures.

Hemel made it back-to-back victories after easing to a win on the road over Lancashire.

AJ Roberts led the way in the win with 20 points as five players reached double figures to help condemn the Spinners to a fourth straight defeat.

Nottingham Hoods (4-0) still lead the way in D2 after they recorded an 82-90 victory away at Liverpool (2-2) after a strong finish.

Ipswich (2-2) held off London Greenhouse Pioneers (1-3) to claim their second league win as Rabi Rai had 24 points in the 90-86 overtime victory.

Meanwhile, Westminster Warriors (2-2) were victorious on the road as they took down Team Birmingham Elite (1-3) 69-75 to move into joint-fourth.

Doncaster Danum Eagles (2-2) levelled their season record with 34 points from Matthew Martin in an 86-76 win at home to Loughborough Riders III (2-2). Also, Sheffield Hallam Sharks (2-2) saw off Birmingham Mets (2-3) for a 76-62 success, despite 25 points from Daniel Belgrave.

Calderdale Explorers (4-0) continued their winning start with an 85-68 win at home to Myerscough College (2-3), while Kingston Panthers (4-1) stayed in touch as they defeated Manchester Magic II (0-4) 63-82 behind Daniel Yates’ 27 points.

Team Derby (4-1) suffered their first league loss, despite 34 points from Dan Watts as Derby Trailblazers II (4-0) secured a 99-109 triumph. Ugo had 33 in the win, closely followed by Leighton Elliott-Sewell’s 32.

University of Nottingham are also off to a 4-0 start after beating Mansfield Giants (1-3) 96-70 with 38 points from Josh Smith, while City of Birmingham Rockets (4-1) are in the top four following a 75-67 success over Nottingham Trent University (1-2).

Barking Abbey Crusaders (5-0) maintained their perfect start with a 58-52 victory against London Lewisham-Thunder (1-4) with a 13-6 second period proving decisive.

RCT Gladiators (3-1) kept up the pressure on unbeaten leaders Taunton Tigers as they claimed an 85-78 victory against Oxford Stealers (0-5) with 37 points from Phil Warren.

London United (3-1) saw their unbeaten run end after falling to a 79-64 loss away at Bristol Flyers II (2-1), despite 26 points from Dan Szatkowski.

Team Newcastle University ended the run of Nottingham Hoods with a 76-71 success as Kingsley Pinda and Fran Urli combined for 21 points apiece.

Last season’s runners-up Solent Kestrels advanced with an 86-67 win at home to Westminster Warriors with 24 points from Elliot Dadds, while Manchester Magic overcame Liverpool in a 65-53 victory.

Reading Rockets raced into the last eight with a dominant 124-44 victory over Cardiff City – who had upset Worthing Thunder in the previous round. Sydney Donaldson fired in 26 points in the win with Tim Gill adding 24 points and 13 rebounds.

Meanwhile, Loughborough Riders eased to a 63-96 win away at Leicester Warriors and they will next face Bradford Dragons after they took down Derby Trailblazers as Ricky Fetske put up 27 points in the 91-83 triumph.

Thames Valley Cavaliers moved into the next round with a comfortable 65-93 win away at Essex Leopards, while D1 opposition awaits next as Hemel Storm defeated Kent Crusaders 69-77 on the road behind Leigh Greenan’s 23 points.

Ties to be played 19 November

London Westside denied London Greenhouse Pioneers a place in the last four as they recorded a 68-63 victory in the re-arranged fixture.

That meant Westminster Warriors advanced via a superior head-to-head record between the three teams in Pool 2 as they joined Thames Valley Cavaliers, Team Birmingham Elite and Nottingham Hoods in the semi-finals.

Ties to be played 04 February