Around the NBL - Week 5 - Hoopsfix.com 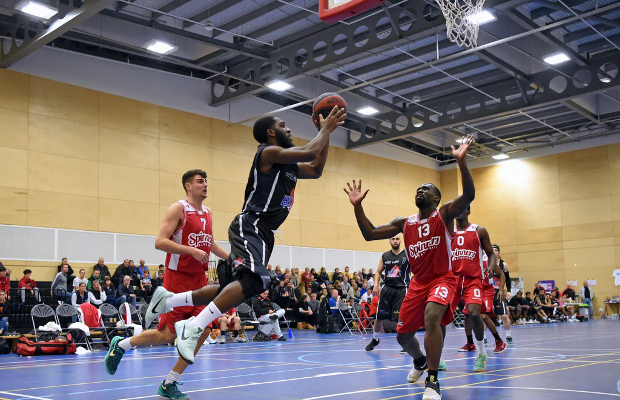 A recap of the fifth week of the 2017-18 National Basketball League (NBL) season.

Manchester eased to their second league win as they defeated Leicester Warriors on the road.

The visitors only led by two at the half, but broke clear in the third with a pivotal 17-2 spell en route to a 23-point victory.

Stefan Gill top scored with 21 points, while Ryan Lewis added 14 points and 10 rebounds as Magic improved to a 2-0 start.

Solent picked up their first league win of the season after beating Worthing Thunder at home, despite 32 points from Zaire Taylor.

Chris Scarlett netted four triples in his 17-point haul off the bench with four starters also in double figures, including Joe Tagarelli who finished with 16 points and 13 rebounds.

Thunder edged a high-scoring second quarter to lead by one at the half, but the Kestrels produced a strong fourth period to take the win.

Taylor’s 32 came on 13-29 shooting with no other player hitting double figures.

Loughborough Riders evened out their league record after pulling out an eight-point road victory in Derby.

The Riders led by 10 at the half before a 20-6 third period from the hosts put them ahead going into the fourth.

However, the visitors took the final quarter 11-23 in dominant fashion for their first league win.

Reiss Pinnock had 17 for Loughborough with the Trailblazers led by Matthew Ward-Hibbert’s 24 points.

Leome Francis goes coast to coast for the nasty poster and-1 for @derbyblazers! #Hoopsfix #NBL1718 pic.twitter.com/4P0PFHeQpM

Kent Crusaders recorded their first win back in D1 after taking down Bradford Dragons in their home opener.

Sean Nealon-Lino had a game-high 24 points with Caleb Fuller adding 16 points and eight rebounds, while Alex Ferguson netted 15 points with just one miss.

“Today was not the best performance of the season for us but it was great to get a win,” said Crusaders Head Coach Lloyd Gardner.

“Bradford are always a tough team to beat, they are well coached and have some smart players who are difficult to stop. The first half performance from us was not one that I was pleased with but I thought we fought hard in the second half to pull back a deficit and take the win.

“We showed some character late on to win a close game and I think that is a really positive sign for us moving forward.”

Marcus Gooding had 17 for the Dragons as they dropped to a 1-1 start.

Team Newcastle University made club history with their first victory in D1 after overcoming Lancashire Spinners on the road.

The visitors dominated the second period, outscoring the Spinners 4-18 to take control and they edged a close second half to take the win.

Kingsley Pinda led the way with 16 points along with seven rebounds, while Fran Urli had 13 and Patrick Wrencher added 11.

Loick Pouale had 16 points having played the full 40 minutes with Lancashire now 0-2 in the league.

Reading Rockets came out on top in a thrilling encounter against Hemel Storm at Bohunt School.

The home side led 95-86 with 1:29 left on the clock before Hemel rallied with an 8-0 run that included a chance to tie the game from the free throw line.

Jerrod Hendricks put up 22 points for Reading with a further 21 coming from Sydney Donaldson to help their side secure a second win.

For Storm, AJ Roberts netted 26 points on his debut with Walid Mumuni adding 18 points on 5-of-7 shooting with the duo combining for 44 of 46 bench points for the visitors as they just fell short.

Nottingham Hoods (2-0) have the outright lead at the top of D2 after a 65-73 road win at Thames Valley Cavaliers that saw Tevis Robinson put up 27 points.

Oxford Brookes University (2-0) are also still unbeaten as they defeated Greenwich Titans 90-94 in overtime behind 31 points from Lorenzo Monticelli.

Calderdale Explorers (3-0) continued their winning start in D4 North with a 95-66 victory over Kingston Panthers (2-1) with 23 points from Rob Donaldson.

Meanwhile, BC Medelynas London (2-0) maintained their unbeaten start with a 66-73 road win against Anglia Ruskin University (1-2)

London United (3-0) are the joint-leaders in D4 South-West having beaten Oxford City Hoops 79-87 with 21 points from Elias Poorman.

Taunton Tigers (3-0) also made it three from three as they edged out RCT Gladiators 85-91 in a high-scoring road win.

Fourth Round to be played 29 October