Around the NBL Recaps - Week 6 - Hoopsfix.com

Around the NBL Recaps – Week 6 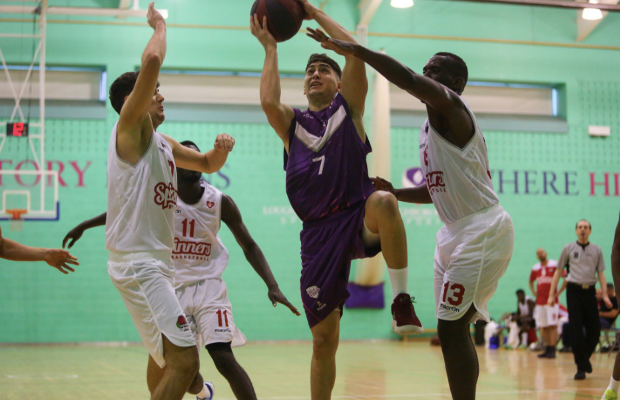 A recap of the sixth week of the 2017-18 National Basketball League (NBL) season.

Loughborough picked up their second league win with an emphatic 68-point success over the struggling Spinners.

The home side held their opponents to 10 points or less in each quarter in a dominant display having poured in 35 points in the third.

Lancashire shot 2-of-26 from 3-point range and finished 23% from the field with George Davis and Loick Pouale netting 12 points apiece.

The Dragons eased to their second win of the season as they stormed to victory over the Warriors.

Bradford scored 63 points in the middle periods and passed the century mark late on to rubber-stamp a convincing home win.

Eisley Swaine top scored with 23 points and also had six assists from the bench with Rafi Saipe adding 20 points.

Rihard Sulcs posted a big double-double of 16 points and 15 rebounds, while Marcus Gooding had eight assists to go with his 17 points.

For the Warriors, Elliott Sentence had 23 points in their third league defeat.

Kent pulled off an impressive win on the road as they earned a nine-point success in Derby.

Dwayne Orija top scored with 23 points, including 8-11 from the line, to lead his side to the win with Caleb Fuller adding 18 points.

The Trailblazers had led by as many as 17 points in a dominant start, but Kent battled back as they powered to victory in the second half.

Kadeem Thompson and Leome Francis had 14 points apiece in the loss as Derby drop to 1-2.

Solent inflicted a first loss on Manchester Magic in the first part of their weekend double-header.

The home side overturned a 16-point deficit to clinch their third victory with 30 points poured in the fourth.

Elliot Dadds had 24 points off the bench including 14 free throws as his side went 26-31 from the line.

Magic had made a 5-21 start, but were unable to maintain their strong opening with 20 points for Donte Gittens and 17 rebounds from Lee Goldsbrough.

Hemel opened their win account in the league with a home victory over Newcastle.

The hosts led 26-14 after 10 minutes, but saw their opponents battle back to cut the gap to four heading into the final period.

AJ Roberts fired in 30 points to go with 10 rebounds to help Storm hold on for the win with David Ajumobi adding 21 points.

Fran Urli scored 20 points for the Knights but their comeback effort came up short.

The Kestrels completed a double-winning weekend to move to the top of D1.

The hosts used a strong second period to establish a commanding 15-point advantage at the half-time break.

It marked a second defeat on the weekend for the Knights, who were led by Kingsley Pinda’s 19 points.

Nottingham Hoods (3-0) maintained their strong start with an emphatic 104-48 victory over Ipswich as Luke Mitchell netted 20 points to lead all scorers. The home side poured in 68 points in the middle periods as they continued their winning run in style.

Essex Leopards (2-0) eased to their second win as they defeated London Westside (0-3) 104-64 with 16 points apiece from John Shodipo and Dougie Bennett as they too remain unbeaten.

University of Chester (3-1) kept up the pressure on D3 North leaders Myerscough College as they edged out Team Sunderland (2-2) for a 74-70 success as Phil Brandreth put up 26 points.

In the only game in D3 South, Oxford Brookes University (3-0) moved top with an 88-85 victory against Swindon Shock (1-2) with Lorenzo Monticelli netting a 30-point haul.

Barking Abbey Crusaders (4-0) made it four straight wins as they eased to a 42-77 success on the road against Folkestone Saints (1-2).

BC Medelynas London (3-0) maintained their own unbeaten record with a 104-86 victory over Chelmsford Lions (3-1) as Guzys had 28 points in the win.

Fourth Round to be played 29 October

Third Round to be played 12 November