Holly Winterburn Named to U18 Div B All-Tournament Team - Hoopsfix.com

Holly Winterburn Named to U18 Div B All-Tournament Team 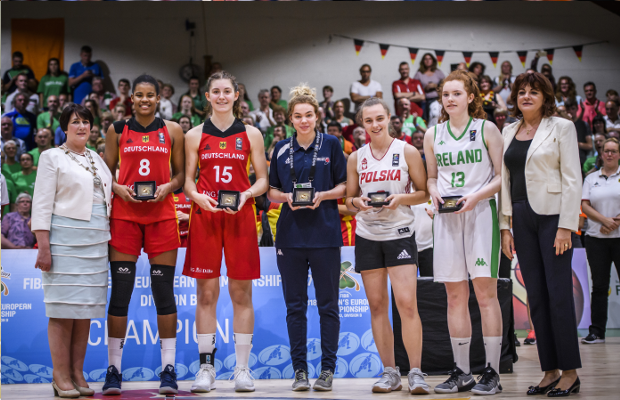 Holly Winterburn has been named to the All-Tournament Team at the Under-18 Division B European Championships after an impressive campaign with GB.

The Leicester Riders forward averaged 13.8 points, 4.8 rebounds, 2.5 assists and 2.9 steals per game to help lead her nation to the verge of promotion.

Winteburn poured in a tournament-high 31 points in a crucial victory over Slovakia to seal GB’s place in the quarter-finals.

The all-round forward – who turns 17 later this year – also hit 21 points in the last eight victory over Romania.

Winterburn starred at both ends of the floor for GB and ranked joint fifth in steals per game with 2.9 behind team-mate Dani Lozzi, who led the tournament with 5.1 per game.

Ireland’s Claire Melia also made the All-Tournament Team with averages of 14.1 points, 8.8 rebounds and 4.9 assists per game as her country earned promotion with a silver medal.