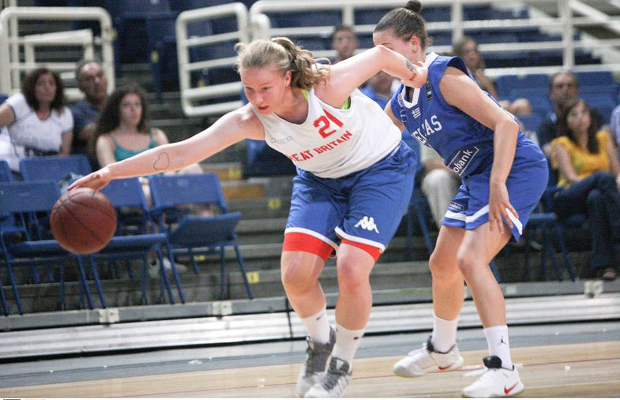 Great Britain Under-20’s Women completed their preparation schedule ahead of the European Championships with a two-game series in Athens.

Chema Buceta’s side put in two spirited displays against Greece, but came up short in each encounter having also been beaten 2-0 by Division A opposition Hungary at the weekend.

Greece – who were relegated from Division A last summer – put up a stern test for GB and claimed contrasting victories; winning 50-32 and 57-51.

In the opening game in the Olympic Arena in Athens, GB Under-20’s suffered an 18-point loss after a positive start.

GB were quick out of the blocks with an 8-0 run and maintained their lead at the end of the first at 10-13.

The hosts turned things around with a 16-6 second period and they established a double-digit advantage in the third to lead 39-27.

GB were held to just 19 points in the final 30 minutes as they fell away to an 18-point loss.

GB Under-20’s completed their prep with a six-point loss in a topsy-turvy second game of the series.

The visitors had led at half-time and despite a late 9-0 rally, fell to their fourth straight warm-up loss.

Once again, GB had made a strong start and led 15-21 after 10 minutes before the gap was halved by half-time with the score now 31-34.

GB stretched their lead to five points early in the third, but Greece responded with a 15-4 close to take control at 48-42 before starting the fourth with a 6-0 run.

After a near six-minute drought in the final period, GB broke their duck and produced a fightback with a 9-0 run cutting the gap to just three points at 54-51 in the final minute.

However, Greece answered with a triple to close out the game and complete a 2-0 series win.

GB start their Division B campaign at the European Championships in Eilat, Israel on Saturday with their first game against Ireland.