GB Under-20s Finish 3rd to Achieve Promotion Back to Division A - Hoopsfix.com 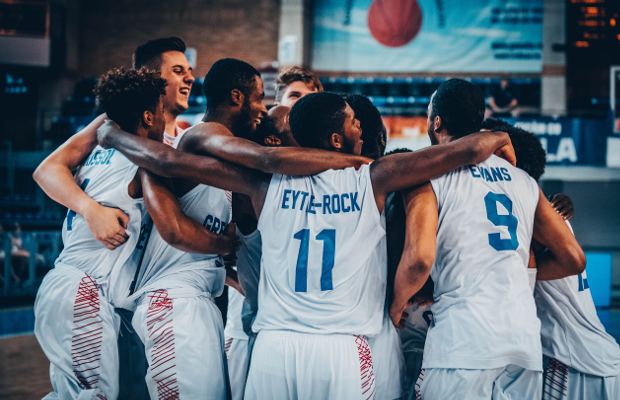 Great Britain Under-20s will compete in Division A next summer after securing promotion with an 81-65 victory over Russia in the 3rd place playoff in Oradea, Romania on Sunday.

Andreas Kapoulas’ side follow in the footsteps of the 2013 squad and ensure a return to the top-flight at the second time of asking having dropped down in 2015.

Akwasi Yeboah top scored with 22 points in another strong display, while RJ Eytle-Rock added 14 points and Carl Wheatle weighed in with 10 as part of a great team effort.

Yeboah opened the game with a three and a further 7-0 run put GB in early control before late triples from Amin Adamu and Obi Agu made it 16-11 at the end of the first.

Russia started the second with a 6-0 run to move in front, but GB hit back with an 11-3 burst containing triples from Yeboah and RJ Eytle-Rock. The lead soon hit double figures and Kyle Carey’s trey made it a 15-point gap at 41-26 before Russia responded in kind to end the half.

A 10-2 start from Russia saw them close within four within the first two minutes of play resuming, forcing Kapoulas into a time-out. Yeboah responded with his third three before five quick points from Danny Evans helped restore the 12-point cushion at 53-41 soon after.

However, GB’s lead was cut in half by the end of the third as they took a 54-48 advantage into the final period.

Every point became that much more important with Russia again closing to within four, though GB’s resistance held firm. The double-digit lead was restored at the midpoint with the defence continuing to frustrate their opponents.

Not for the first time in the tournament, Arissol stepped up to land a huge 3-pointer with GB beginning to break away with a 68-55 cushion inside the final four minutes.

Russia continued to apply pressure, but five points in a row from Yeboah made it 75-59 with 90 seconds to go and GB were able to complete a memorable win to seal their return to Division A.

GB U20s finish the tournament with a 5-2 record with defeats coming against the Netherlands in their opening game and to Croatia in the semi-final with wins including an impressive double over Russia and the thrilling last eight triumph over Poland.