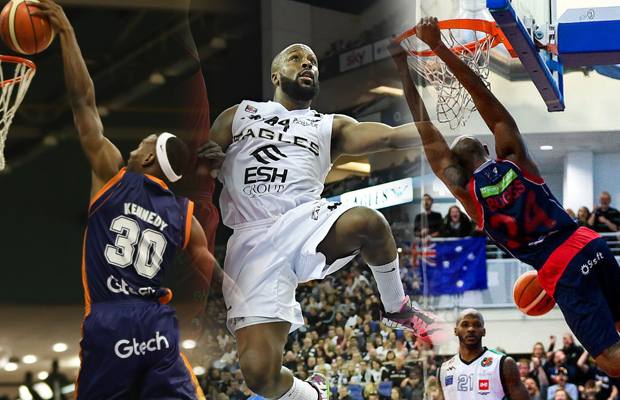 This season, for the first time, Hoopsfix trawled through every BBL game to produce a top 10 plays each week.

Now that the 2016-17 season has come to a close, we decided to look back through our entire archive to work out which players featured most frequently and using a standardised calculation to remove any bias (multiplying number of appearances with the corresponding score for each position) have put together the top 10 highlight players from the BBL during the 2016-17 season.

Entering the series in week 8, Taylor began to show up frequently over the next 10 weeks managing 3 consecutive appearances. However, it wasn’t until week 30 that he appeared once again at number 1 with a game-winning shot in overtime.

Toluwase got off to a great start managing number 1 in his very first appearance. Over the course of the season, Toluwase provided some of the most impressive dunks, finishing with 5 top 3 appearances out of 7 – the best record of any player – and good enough for number 9 in our top ten.

Despite only one finish in the top 3, Murray started off the season with frequent appearances right from week 1, and was on track to be one of the series’ most featured players. However, he unfortunately only managed 2 appearances in the second half of the season, falling a few positions by the end of the play-offs. Regardless, he slides in at number 8.

Arguably the league’s most athletic player and would be an obvious thought for a leading spot in this countdown, Allen-Jordan jumped into Week 18 with a dunk against Leicester but of course, it was an even better dunk against the same team that landed him with the best play of the 2016/17 season. He’s in at number 7.

Taylor is the only player to manage back-to-back number 1’s during his notable start to the season. However, it was his three appearances during the play-offs that sent Taylor up 5 positions into the final top 10, where he finishes up at number six on the season.

With the most top 3 finishes of any player this season, Brown definitely made his mark on the league, particularly through weeks 12 to 16. His high-flying dunks eventually landed him a place in the plays of the season at number five.

In comparison to other players on our list, Dixon peaked during the second half of the season with six back-to-back appearances, starting with his first number 1 in week 22. With a fairly consistent record, Dixon is one of the players that can always be relied on to provide an impressive finish at the rim and is our number 4 highlight player on the season.

Considered by many as the best player in the BBL and the league’s back to back MVP, Fletcher has earned his place on this list by giving us some of the quickest crossovers and craziest finishes around the basket despite being a below the rim finisher. After setting the best record over the course of the play-offs, Fletcher moved up 4 places to finish 3rd overall.

Kennedy’s plays throughout the season made the case that he is one of the league’s most versatile players. Whether it’s a no-look pass or windmill dunk, Kennedy’s appearances were made up of a variety of different plays and earns him number two in our countdown.

From day one, Boggs has delivered, so much so that BBL commentator Dan Routledge stated, ‘it wouldn’t be a top 10 plays without Brandon Boggs.’ His performance led to two of his plays getting featured in the plays of the season, one of which was his game-winning shot against London – one of the most memorable on the year year. Like Dixon, Boggs holds the record of 6 consecutive appearances in the top 10 and after 19 appearances in total, he has ensured that everyone in the BBL knows his name; as he prepares for a second season in the UK having re-signed with Bristol for next year.

Thoughts? Any surprises? Let us know who your favourite highlight player was this season and check out the Top 10 Plays of the 2016/17 season.