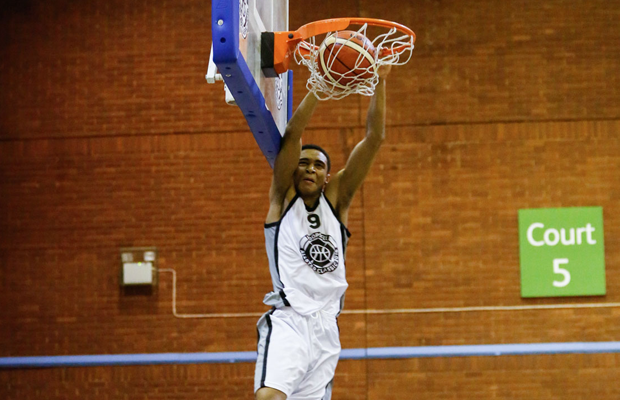 Having just finished his final season with the Manchester Magic, the England junior international and Hoopsfix All Star Classic alumnus Kaiyem Cleary talks to us about a variety of subjects including his introduction to basketball, his hopes for this summer’s European Championships with Great Britain and balancing his studies with basketball.

Hoopsfix (H): Hi Kaiyem, let’s start by asking when did you first play basketball competitively, and what got you involved in the sport?

Kaiyem Cleary (KC): Well, I was 11 years old in Year 7 when I first started playing seriously and began to compete representing my school. It’s quite a weird one how I got into it; I wasn’t in contact with my dad for a while and when we met for the first time we went to a park near his and he introduced me to the game. Everyone around me at that age was really into football, so I used to go with my mates and play but I didn’t really enjoy it.

H: So, when did you take the next step up and play for your local team?

KC: A Manchester Magic Coach, Richard Hill, visited my secondary school towards the end of Year 7 to lead a session and invited me along to a try-out for the side. I performed well at the trial and then started to go to training and played my first game for the Magic whilst in year 8. I’ve been here since then and have developed a real passion for the club.

H: What’s your relationship like with your current (Magic U18 and Loreto) Coach Pete Paraskeva and how do you feel he’s impacted your development as a player?

KC: We have a great relationship! Pete’s such a nice guy, he’s been my coach for the past two years now so we know each other quite well. He’s had a huge impact on my development, one of the biggest things he’s helped me to improve over the past two years would be my in-game IQ. We still have regular talks about how I could read the game better and play smarter.

H: How do you feel that your final season with the Manchester Magic went looking back on it?

KC: I’d say this season was the one that stood me out from previous years. I kind of blew up this year, it’s definitely been my best season! I think the success this time was down to my off-season, every day I would just be working on my game to make sure I made my final year count. Even though we didn’t finish where we wanted to in the Final Fours, we were undefeated in the season which must be seen as an achievement.

H: You’ve also represented the Manchester Magic Men’s Division 1 side this year, how was that experience?

KC: It was great, I was playing good minutes for them and feel that I made a big impact whilst I was on the court. I feel that I developed a lot myself playing with them, learning from the other guys that have been playing much longer than I have. I was competing with them a lot more in practice and in games, showing that I’m actually good enough to play Division 1 basketball.

With the Junior Final Fours taking place in Mcr this weekend, we have @Mcr_Magic's @KaiyemC9 taking over our Snapchat! Add Hoopsfix! 👻🇬🇧🏀 pic.twitter.com/1zbDZSrPfj

H: Unfortunately, you didn’t get as far as you wanted to in the Junior Final Fours last weekend, how do you feel reflecting on the competition?

KC: It was a big disappointment for us not to progress further because at the start of the season it was our goal to win the championship. Going undefeated in the season gave us high hopes heading into the competition, the teams we played we’d beaten before. We all know anything can happen in one game and on the day they just came out stronger than us. It really hurt me, I put a lot of pressure on my own shoulders to lead the team. Regardless of this, I’m still really proud of my team, that we made it there and I feel blessed to have been able to play with them.

H: Finishing the season as champions of NBL D1 and leading the EABL in scoring, is a great way to sign off from the Magic but what’s the next step for you now?

KC: I hope to attend and play at a Prep school in America before making the step up to the NCAA, that’s my main aspiration. I’ve had offers from Division 1 and Division 2 NCAA teams to attend on a full athletic scholarship but I feel waiting a year whilst I adjust to the change of environment and work on my body. By doing this it will prevent me from wasting a year at college adapting, so I’ll still be able to have a full four years of NCAA basketball when I leave Prep school. I’m looking at a school in Kansas at the moment I’m just waiting on the offer with a full scholarship. Another advantage of this is that I’ll have more exposure to the Division 1 and 2 colleges whilst I’m competing in prep-school.

H: Are you confident that you’ll be able to compete in the States?

KC: At first I think that it will be challenging, but yeah I believe that the way I play will allow me to adapt very quickly to the level of basketball over there. I definitely feel that I’ll be able to take that next step.

H: You’re in your final year of college now over here, how do you finding it balancing your studies and basketball commitments?

KC: Yeah, I’m at Loreto College, studying chemistry, biology and media. It’s quite tough but I enjoy it a lot, I’m really interested in the sciences and hope to study biochemistry in America. Being a full-time student-athlete is hard! I often find myself coming home from training at 11 and having to cook before I start my school work. What helps me to get through it is the hope that one day it’ll pay off; I’m a work hard now, rest later type of guy.

H: You’ve represented England previously, how did your selection for the national team come about?

KC: I started playing for England at U16 level, but before that I was selected for the North-West team. I went with them to a regional tournament and that’s where the England scouts spotted me. I was also selected for the England U18’s last year but had an injury with my knees so they had to let me go which was disappointing. I’m back on the team this year and we have training camp in a few weeks so I’m really excited for that opportunity.


H: What are your aspirations for the European Championships this summer playing for Great Britain, as a team and for you individually?

KC: Well, as a team our main goal is to get promoted back to Division A and we can do this by winning every game we play, so we head out there to win as much as possible. We have a very strong team this year and would definitely be able to compete in the highest division. Individually, I’m looking to just give it my all every single game, to get my name out there on the European stage by dominating as much as possible on a winning team. Playing internationally will be a great chance for me to showcase my game and get exposure.