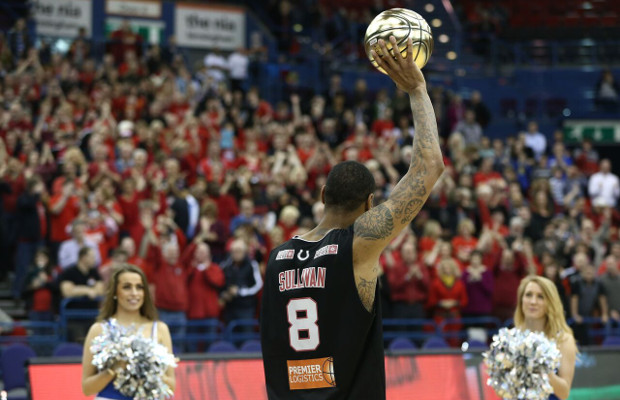 Drew Sullivan has announced his retirement from professional basketball after an illustrious career at the top of the game.

The former GB captain – who retired from international basketball last summer – bows out on a high having helped Leicester Riders secure a treble with victory in the Play-Off Final at The O2 earlier this month.

Sullivan earned an impressive total of 20 winner’s medals during his time in the BBL, making him one of the most successful players in the history of the league.

The Villanova graduate started his BBL career as a 15-year-old with London Towers in 1995 and eventually returned for another season in the capital with London Lions in the 2014-15 season before re-joining the Riders.

On three occasions, Sullivan won three trophies in a single BBL season and also achieved the ‘clean sweep’ of all four trophies with Newcastle in the 2005-06 season.

Sullivan was named league MVP following that memorable season and earned the award again in the 2012-13 season, whilst also winning the Trophy Final MVP accolade three times (2006, 2011 & 2016) as well as Cup Final MVP in 2014

Sullivan began his professional career in the Netherlands and also had spells in Spain, Russia, Belgium and Cyprus before spending the last seven years of his career in the BBL.

A Commonwealth Games bronze medalist winner in 2006, Sullivan went on to captain Great Britain, leading his country at the 2012 Olympics in London and played his 100th and final game against New Zealand in 2015.

Hoopsfix wants to congratulate Drew on a remarkable career and wishes him all the best for the future!