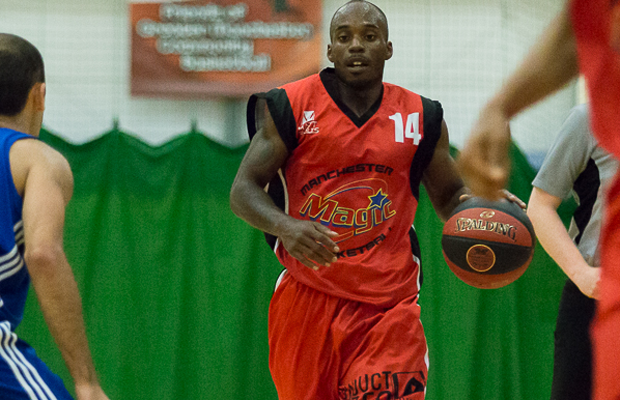 After spending four seasons with the Manchester Giants, and three before that with the Milton Keynes (now London Lions), athletic point guard Stefan Gill has been one of the BBL’s most familiar faces in recent years. This summer, the Manchester based marksman made what he calls a “step across” in moving to NBL D1 to go back to where it all began for him.

Hoopsfix (H): Hi Stefan. Let’s start off by talking about your background, and how you got into basketball at an early age.

Stefan Gill (SG): My background was all sports really, I was sprinting and playing football, and to be honest I wanted to try and indoor sport because I hated playing outside! One day, when I was about 15, I saw Manchester Giants tickets in the newspaper and decided to go along, and just fell in love with the game. I started playing for the school, and then when I left I went to train with what is now the Manchester Magic at the Amaechi Centre. It was there that Joe Forber saw me, and I guess he recognised my athleticism and invited me to join their Under 18s.

(H) And growing up being an undersized scorer, who influenced your game when you started out?

SG: Allen Iverson, Stephon Marbury, honestly Jason Kidd as well. I was a very fearless kid, and I had a chip on my shoulder because I was always the smallest and the latest to start playing as well. I think my passion was what accelerated my growth, and watching people like Allen Iverson who had to go hard with what they had really resonated with me.

(H)I think a lot of people will be familiar with you through your spectacular dunking at events such as the Nike World Basketball Festival in Brixton a few years back. What gives you such crazy leaping ability at just 5”8?

SG: I didn’t start working on my legs until I was something like age 27. I never really needed to. This may sound a bit weird, but I just believe in myself a lot. I don’t believe I have any limits.


(H)Coming back to the present now, you’ve spent a lot of your career in the British Basketball League, the last four with the Manchester Giants. This summer you’ve moved across town to the Manchester Magic, in NBL D1. Why did you make the move to a lower division?

SG: There were some issues in trying to sort out a contract with the Giants for a fifth year, and with everything else that’s going on in my life I felt like it was the best move. I was really disappointed that I could not represent basketball at the highest level at home. I think teams should make it more viable and more attainable for their home-grown players to do so, and the Giants didn’t do that for me this year. I wish them all the best, but it was a great disappointment. With me running my own strength and conditioning business and my family being here, I wanted to stay local. Financially it made more sense to be at home, so it was a bigger decision than just basketball.

(H) You talk about teams in this country not doing enough to promote their home-grown talent, what do you think can be done to help promote the game as a whole in the UK?

SG: I think we need the people who are in the position to develop the game to believe in it a bit more. I can’t speak for anywhere else, I just know that in Manchester we probably don’t believe in this sport enough. I think people tend to just look at the financial aspect, but that’s the last thing they should be worried about. We need to invest more time into learning how to market the game and sell it to people. In the era we are in with social media, it needs to be promoted a lot more.

(H) Do you think your experiences in the game will be able to help the Magic, who are obviously a very young team? Is it a challenge for you to lead such a young group?

SG: Yeah definitely, especially because of where I’m coming from. I’m not coming in with an ego, I’m coming from a place of hard work, determination and belief, and I believe I can help those guys in that sense. I believe that I personally get better every year, and now I’m here and there’s no older players, no American players, it’s just me having to lead and that is helping my maturity as a basketball player. I’m a very quiet guy, and I believe in leading by example. People are more likely to believe a guy that’s already done something over somebody who just shouts orders.

(H): A few weeks ago against Solent, you produced an early contender for the most spectacular finish of the season. Can you talk me through how you pulled off such a clutch couple of plays, and what goes through your mind after that second shot falls?

SG: It comes down to faith and belief. We’re in the timeout, when we’re down five with about seven seconds left, and the coach says just get the best shot you can. I turned to the rest of the team and said “do you believe in miracles?” and everyone just started laughing. But in my mind, I’d already played this scenario out a thousand times. Who hasn’t imagined taking the game winning shot, who hasn’t watched Tracy McGrady (vs the Spurs) on YouTube 15 times, you know what I mean? You play the game for moments like that, I just needed the ball. So we called the play for me to take the shot, and I made it. Now it’s a massive credit to my teammates to get the ball back like they did, but in terms of making the shots, I’d already made them in the timeout, in my mind.

After I made it? I wasn’t present, it was a shock for me too! It was a sign of my belief that what I saw actually came true.


(H): The season is going great for the Magic so far, undefeated in competitive games at the time of writing. What do you think are the keys to your great start?

SG:Our coach, Paul Middleton. Without a doubt, he’s one of the best coaches I’ve played under. He just equips us so well for every game. Obviously coaches aren’t full time professionals in the UK, but he’s one of the better guys at being a professional, even without being paid as a professional. He does his homework on every team, he prepares us diligently for every game, and we prepare offensively and defensively very differently for every game, and that’s the difference, that he invests in us, and he selects people that are willing to do the same.

(H): And finally, what are you and the Magic hoping to achieve in the rest of the season?

SG: We want to try and win as many games as possible. But we also want to make sure that these younger players develop and get something out of this, as opposed to just winning trophies.