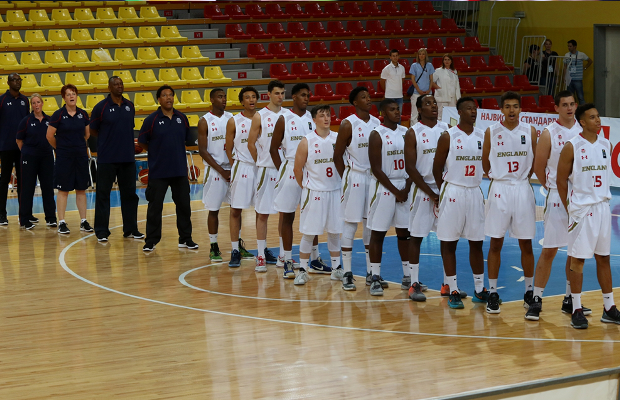 England Under-18’s held their nerve in the closing seconds as they beat Georgia 85-81 to seal a ninth place finish in their final game at the European Championships in Skopje, Macedonia, on Sunday afternoon.

Steve Bucknall’s side started the tournament with three straight losses, but finish with a flourish on the back of five wins in a row to secure a place just outside of the top eight.

After coming back from 13 points down with a third quarter blitz, England led 79-72 with 50 seconds left only to see Georgia tie the game at 81 in the final seconds.

RJ Eytle-Rock came up clutch with the go-ahead basket with four seconds left and Luke Mitchell went 2-of-2 from the line to seal the win.

Brian Amabilino top scored with 23 points as he and Nelson Boachie-Yiadom – who had 18 – sparked a recovery in the third as England put up 33 points to turn the game around, while Zion Tordoff added 16 points.

It was Georgia who edged the opening stages before using a 14-2 run to lead by as many as 13 points. However, England scored the next eight points in the final two minutes of the first quarter to trail 26-21.

An 8-0 start to the second wiped out England’s late resistance and the gap would remain at 13 points with Georgia 47-34 ahead at the half-time interval.

England began to gradually cut the deficit in the third and scored six straight to close within three points halfway through the period. Georgia led 60-53 with three minutes to go before an 11-3 run including eight points from Amabilino fired his side ahead.

Amabilino added another triple for 13 points in the quarter as England took a 67-66 advantage into the fourth stanza. The momentum continued into the final 10 minutes as England stretched their lead to as many as seven with Tordoff’s basket making it 79-72 inside the last two minutes.

England survived a late onslaught from the opponents that beat them earlier in the tournament before securing the win as overtime loomed with Eytle-Rock once again coming up clutch when required – as he did in preparation (see here).

England U18s finish in ninth place with an overall 5-3 record.