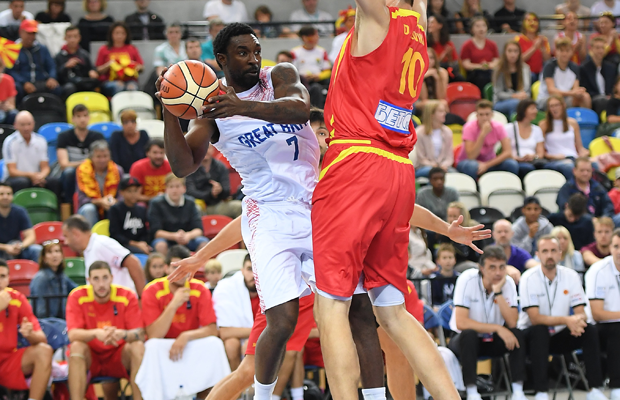 Great Britain’s Senior Men recorded a convincing 96-79 victory over Macedonia to get their EuroBasket 2017 qualifying campaign up and running at the Copper Box Arena, on Saturday evening.

Joe Prunty’s side were relentless in their approach and pulled away in the fourth to tie their Group G record at 1-1 following defeat in the opener in Hungary last Wednesday.

GB finished 13-of-25 from 3-point range and had a number of vital contributions in an impressive display that ended a run of six consecutive losses this summer.

Eric Boateng had his best game for GB as the leading scorer with 18 points, combining with Teddy Okereafor – who dished out eight assists – on numerous occasions as he ended up 6-of-6 from the field.

“It was our focus on defence,” GB captain Kieron Achara said of the key to victory.

“Unfortunately we got off to a terrible start, allowing 30 points in the first quarter.

“I know we were both scoring back and forth but we know that in EuroBasket, that is not enough and to qualify, we have to get stops.”

“I was just thankful that we were able to step up the game in the second quarter to put them under a lot of pressure. Everyone stuck to their assignments and we were able to pull through with a big win.”

Gordon netted a three to open the scoring – having gone 0/8 in the opener – and it set the tone for an efficient opening period for both teams.

GB made a move with a 9-2 run, containing triples from Gordon and Clark to lead 26-21. Macedonia eventually tied the game with a three before converting a steal at the buzzer to end a high-scoring opener, 30-28 ahead.

Lawrence opened the second with another three and GB would begin to pull away with a 9-0 run – including seven straight from the line – as they capitalised on their opponents being in the penalty.

GB led by as many as 11 following 3-pointers from Achara and Okereafor, but the visitors ended the half with the final four points to trail 50-43 heading into the locker-rooms.

Gordon moved into double figures early in the second half as GB maintained their advantage. Boateng began to assert himself at both ends with a couple of emphatic finishes to make it 58-49 at the midpoint in the period.

GB continued to hold firm and had an answer for everything Macedonia hit. Gordon netted from beyond the arc to create the biggest lead of the night at 12 points, but the advantage was reduced to 69-60 ahead of the final 10 minutes.

Clark netted a wide-open three to start the fourth as GB’s fortunes from downtown continued with Gordon following suit to make it 75-60.

Lawrence scored five straight before Achara continued the 3-point barrage to further increase the lead to 17 points. GB kept up their intensity and the eventual winning margin would remain the same as a convincing success was wrapped up.

59 of the 96 points came from the bench compared to their opponents’ 8 with Vojdan Stojanovski leading his side with a game-high 28-point haul.

Macedonia were well supported with a loud chorus of supporters, but Damjan Stojanovski’s participation was limited through injury and 7’5” Marko Dujkovikj fouled out early in the fourth.

GB are next in action on Wednesday when they take on Luxembourg in their third group game, once again at the Copper Box Arena, at 7pm.

Hungary defeated Luxembourg 89-64 and they sit top of Group G with two wins from two.