Team Black Pull Away to Gain Victory in #HASC16 U17 Game - Hoopsfix.com

Team Black Pull Away to Gain Victory in #HASC16 U17 Game 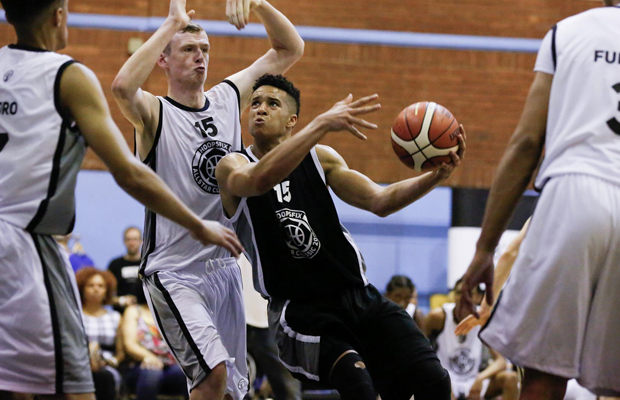 Team Black produced a strong second half display to come from behind and beat Team White 93-73 in the 2016 Hoopsfix All-Star Classic Under-17 game in front of a sellout crowd at Brixton Recreation Centre.

Zion Tordoff led Team Black with a team-high 18 points on 7-of-11 shooting and also added six rebounds and four steals to claim the MVP award.

Sesan Russell provided support with 17 points in an energetic display, while Brian Amabilino nearly had a double-double after finishing with 11 points and nine rebounds in the 20-point win.

“It feels amazing to be MVP,” said Tordoff. “It’s a great honour especially as part of a great event.

“I think I played well, I didn’t force too much and my team-mates found me in good positions.

“It’s good to have a showcase of the top talent and to put in a good performance is pleasing.

“I love winning so to get the win today means a lot to me, and I’m pleased for my team-mates that we were able to get the job done.”

Tordoff set the tone early on with Team Black making a fast start as they scored 10 straight and they would maintain the lead throughout the first period.

Karl Brown’s Team White settled into the contest and managed to stem the early tide with Jacob Round showcasing his talent with his side eventually trailing 22-17 after the first quarter.

Russell netted an early three in the second and followed suit later in the period to make it a nine-point game at 38-29. Kaiyem Cleary led the Team White recovery with the final seven points of the half in a 13-0 run to help his side into a 42-38 advantage at the interval.

Bucknall’s side started the second half as they opened the game and re-took control by limiting their opponents to just four points over the first seven minutes of the third in what was a pivotal 16-4 spell.

Round netted another three, but Team Black scored the next 10 points to build a double-digit cushion for the first time with Cameron Bett threading the needle with a perfectly timed one-handed dish to cap the run.

Demilade Adenuga stopped the rot with a score from downtown, but Eisley Swaine banked in an immediate reply on the buzzer to hand Team Black a commanding 67-52 lead to take into the final quarter.

The gap proved to be too much for Team White to claw back with no let up from Team Blacks as they continued to extend their advantage in the closing stages to make sure of the victory.

Every player on both rosters got onto the scoresheet and nine points in a row late on saw the lead peak at 23 points before Caleb Fuller concluded the game with a three at the buzzer to end up as the game’s leading scorer with 19 points.

You can watch a replay of the full game, below: