Team White Edge Out Team Black in #HASC16 U19 Game 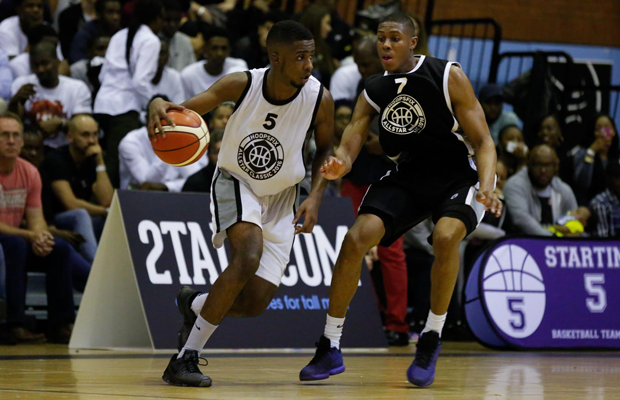 Team White claimed an 83-77 victory over Team Black in the 2016 Hoopsfix All-Star Classic Under-19 game in front of a sellout crowd at Brixton Recreation Centre.

“To end up as MVP is a blessing,” he said. “It’s my third time at the Hoopsfix All-Star Classic and I’m just really happy to have won and to be MVP.”

Last year’s MVP, Kyle Carey, top scored with 20 points for the victors and netted a dagger three in the final minute with his side able to secure the win from the free throw line.

There were a number of top plays during the contest as both teams put on a show in a competitive battle with all 22 players getting onto the scoresheet.

Great day @Hoopsfix All Star Classic. Was awesome to see some of the best talent in the country competing #HASC16 pic.twitter.com/qgmEretSyA

Team Black made a positive start with Henri Langton showing his range to open his side’s scoring from beyond the arc before Shaquille Walters followed suit from deep. Carey responded with a three of his own to push his side ahead having blocked Walters moments earlier in the first instalment of their anticipated match-up.

The hot start from downtown continued from both teams, but it was Andreas Kapoulas’ Team White who edged ahead with Ben Maranann netting two triples to help establish a 24-19 advantage at the end of a high-tempo opening quarter.

The lead doubled to 10 points in the second when Evan Walshe netted from deep, though Team Black hit back with a 14-2 run to take the lead with Carl Wheatle getting things done at both ends. The two teams would go into the half-time level at 41-41 with the game evenly poised at the interval.

When play resumed, it was Team White who began to break clear once again as they re-established their double digit advantage. Maranan moved into double figures himself with five points in quick succession, but James Lloyd stepped up for Team Blck with five points in a 7-0 close to the third quarter to cut the gap to just two points at 61-63.

There was little to split between the two sides in the early stages of the fourth and after Team White had led by as many as six in the period, another 3-pointer from Lloyd made it a one-point game with three minutes remaining before levelling at 75-75.

Eytle-Rock pushed Team White back ahead with a strong drive to the basket and Carey followed with a huge three to put his side up by five with 45 seconds left, and it would prove to be the decisive shot.

There was almost another iconic HASC moment, but Walters’ attempted poster on Luke Mitchell rimmed out as he was fouled before the MVP, Eytle-Rock, closed out the win from the line at the other end.

Team Black’s Head Coach, Josh Merrington said: “It was great to be part of Hoopsfix All-Star Classic and it was great for me, personally, to be asked to coach in the game.

“I thought it was a good game and was competitive throughout, but they were able to pull away and get the win in the end.”

You can watch a replay of the full game, below: