Steve Bucknall & Karl Brown To Face Off in Hoopsfix All Star Classic U17 Game - Hoopsfix.com 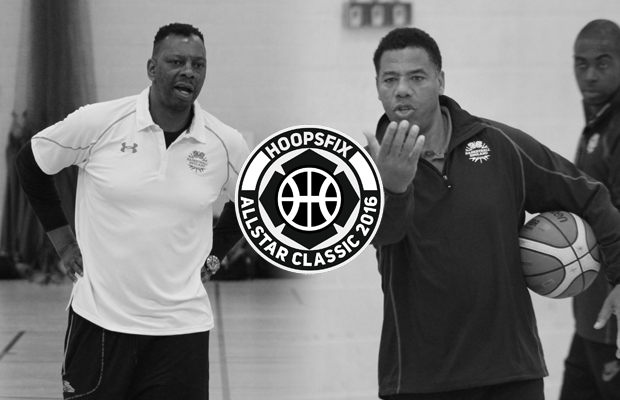 England Under-18 coaching staff and British basketball legends Steve Bucknall and Karl Brown will face off in the Hoopsfix All Star Classic Under-17 game on Sunday June 5th in Brixton (tickets!).

The two coaches were responsible for the England Under-18s promotion to Division A in 2012, then their best ever finish in 2013 with ninth position.

Both former England & Great Britain internationals, and both now run their own clubs, with Bucknall heading up London Thunder and Brown in charge at Leicester Warriors.

Bucknall will head up Team Black, while Brown will take the reigns of Team White, and both are looking forward to the day.

“The development of such events is important along the elite player pathway and brings more awareness, credibility and exposure to our kids,” Bucknall, a former LA Laker, said.

“I look forward to supporting the Hoopsfix All Star Classic and seeing some of our National Team squad players perform.”

Meanwhile, Brown, most famous for being the first British player to compete in the NCAA Final Four with Georgia Tech in 1990, added:

“It’s great to be coaching in such a prestigious game with all this great young English talent. I am looking forward to a fun and competitive game, and coaching against Mr Bucknall.”

With a week to go tickets are moving fast – make sure you don’t miss out by buying yours now – click here!