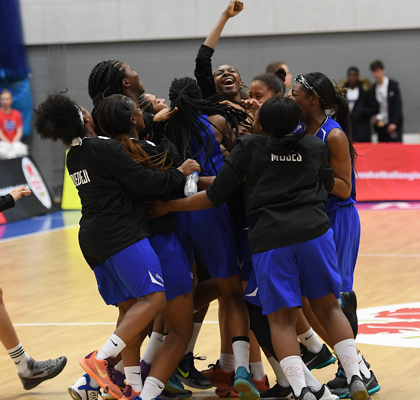 Southwark Pride have won the WNBL play-off title in their first season after a 68-59 victory over Reading Rockets at the National Basketball Performance Centre in Belle Vue, Manchester.

Despite a blip in the latter stages, Southwark led for the majority of the contest, forcing 17 turnovers off the Rockets and scoring 21 points off those errors. Reading were able to reduce the deficit to 59-52 late in the fourth, but that was the nearest that they got.

“I’m so proud of the girls for the effort, the enthusiasm and dedication that they have put in this season,” Pride coach Jackson Gibbons said.

“We represented ourselves well throughout our first season and today was the best showing that we have had. Defensively, we knew we had athleticism on our side and we took advantage of it. Offensively, we were smart and executed our plays and that is all I can ask of them.”

Emerald Ekpiteta led the way for the winners with 21 points and 10 rebounds, on her way to the finals MVP award. Cheyanne Scott added nine for the Pride.

A determined Southwark side crashed the boards early and took a deserved lead before Reading clawed their way back and drew level at 12-12 thanks to a steal and score off the inbound by Maike Delow.

Reading though still trailed 19-14 after one quarter but a score from captain Lutz gave them their first lead of the game at 21-20 three minutes into the second. This was part of a 10-0 burst from the Berkshire unit that gave them a four-point cushion.

However, Southwark kept their interest valid, and they ended the half on a 10-0 run of their own to lead 37-28.

The factor behind Pride’s run was due to their stifling full-court pressure, which resulted in two Rockets turnovers in back-to-back possessions. Southwark kept their pressure up in the third quarter, which rewarded them with their first double-digit lead at 43-32, forcing Reading coach Joshua Thorne to call a timeout.

But despite a fourth quarter surge from the Rockets, led by Lutz, seven points was the closest Reading were able to get to an energetic Southwark unit, who quickly restored their double-digit cushion and never looked back.