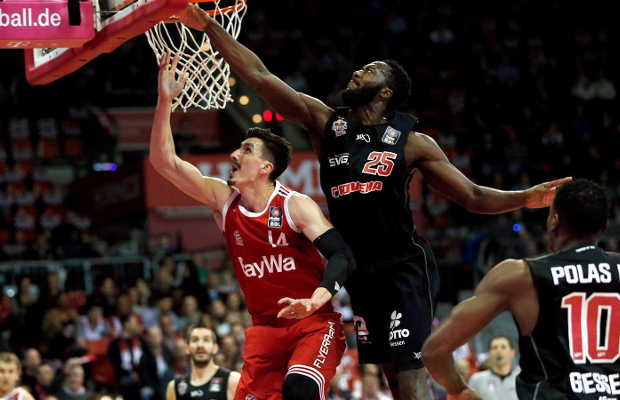 We take a look at how the top Brits overseas are getting on in their respective regular and post-season campaigns from the past week.

Luol Deng posted 22 points and 11 rebounds in a 102-100 loss against the Lakers, before following up a 17-point showing against Sacramento Kings with a 14-point, 13-rebound double-double in a further loss against Portland Trail Blazers as Miami Heat drop to 44-32.

Matthew Bryan-Amaning scored 19 points to help Club Soles into a 2-0 advantage in the LNBP Finals in Mexico. The 27-year-old netted eight in an opening 55-53 win in Game 1, while Aaron Geramipoor had six points and nine rebounds before they earned a 73-72 victory in the second home game.

Myles Hesson scored 10 points from the bench as Dijon (14-12) suffered an 80-64 loss on the road in Pro-A this past weekend in a further blow to their playoff hopes. In Pro-B, Laurence Ekperigin collected a mammoth 16 rebounds to go with 10 points and four assists to help Poitiers (14-11) to a 70-82 road win.

Also, Eric Boateng won the NM1 league title after contributing 12 points and nine rebounds to a 75-50 victory in midweek to seal the Championship for Blois (25-5), before they were beaten 94-84 at the weekend. Gareth Murray scored 16 points for Angers (15-15) as they fell to an 81-77 loss.

In Spain, Dan Clark scored seven points and had five rebounds as Andorra (11-15) were beaten 83-80 by Gipuzkoa (5-21) on the road with Mo Soluade scoring his only field goal attempt in 12 minutes of action for the home side.

In Germany, Gabe Olaseni scored nine points and added five rebounds with Giessen 46ers (14-13) falling to an agonising 76-75 loss in the BBL to drop out of the top eight. Ali Fraser recorded a double-double with 12 points and 10 rebounds, while Nigel Van Oostrum dished out eight assists in a 96-66 loss for Leeuwarden (8-17) before both players scored 17 points apiece in a following 84-75 defeat with NVO adding 11 assists for a double-double of his own.

Elsewhere, Will Saunders netted 14 points for Angelico Biella (14-13) in Italy’s Serie A2, but his side fell to a 78-79 defeat at home. Jules Dang Akodo recorded nine points and had seven assists as LTH Castings claimed an 86-78 win in Slovenia.