Around the NBL – Playoffs QFs Recap 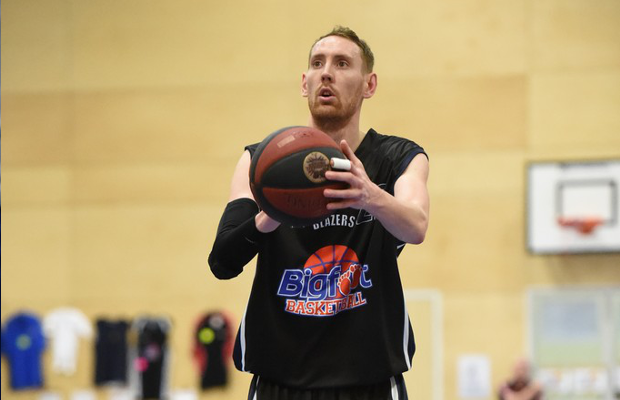 The NBL Playoffs were at the quarter-finals stage across all four divisions at the weekend – check out what happened and who’s advancing to the Final Four.

Manchester Magic continued their quest for a clean sweep in D1 after a strong second half display saw them overcome the challenge of London Lituanica with a 71-55 success. The ever-reliable Ellis Cooper racked up 27 points and also added nine rebounds and five steals to guide his side into the last four. Magic had suffered their first league defeat at the hands of Lituanica at home in November, and the game was evenly poised as the teams went in level at half-time. However, Paul Middleton’s side stepped it up in the second half, holding the visitors to just 21 points as they stormed clear for the win. Danger man Ausridas Petraitis finished with only six points with captain Paulius Adomaitis top scoring with 14 points from the bench.

Derby Trailblazers made an emphatic start to their post-season campaign with a 91-61 success at home to Lancashire Spinners. David Watts (pictured) netted six triples on his way to dropping 30 points with the former BBL star also collecting 13 rebounds for a fine double-double. Oliver Stanley also tallied a double-double with 13 points and 15 boards, while Dan Watts filled the stat-sheet with nine points, six rebounds, five assists and three blocks. The Spinners were led by Steven Gayle’s 21 points with Kyle Carey adding 15 as Neal Hopkins’ side bowed out to conclude a promising maiden campaign in the NBL top-flight.

Reading Rockets lost both games against Essex Leopards during the regular season but produced a strong finish to claim a timely first win with a 102-84 success on Sunday. Danny Carter led the way with 22 points, while Antonio Robinson finished with 21 points, eight rebounds, seven assists and five steals in an all-round display. The Rockets powered home in the final quarter after racking up 40 points to get over the line in style.

Meanwhile, Team Northumbria were the only team to win on the road in the quarter-finals and were helped on their way by Lewis Champion, who dropped 43 points to lead his side to an 85-95 victory over Hemel Storm. After trailing by four at the end of the first, Northumbria scored 55 points during the middle periods and held off a late fightback from the home side to set up a semi-final clash with Manchester Magic. Tom Adorian top scored for Storm with 24 points with Walid Mumuni adding 17.

Solent Kestrels are the number 1 seeds heading into the post-season following their D2 title triumph, but almost suffered an opening round defeat. They battled back from 17 points down at half-time to force overtime and went on to edge out Derbyshire Arrows 80-79 after a low-scoring extra period. Louie Kirkman went 1-of-2 from the line in the final minute, and that proved to be decisive as he finished with 22 points and 15 rebounds in the win, while Elliott Dadds top scored with 25. For the Arrows, they were led by Joseph Baugh’s 20 points, but fell just short of progressing to the semi-finals.

There was a mini-upset of sorts as D2 runners-up and Patrons Cup winners Loughborough Student Riders went down 66-73 at home to Liverpool. The visitors were beaten at home to Loughborough last week in the final game of the regular season, but pulled off a repeat of their victory at Sir David Wallace back in February. Jack Hudson top scored with 20 points and also handed out eight assists and Martin Calvo contributed 19 points as well as five rebounds, six assists and three steals. Mark Jarram’s side moved ahead going into the final quarter, but were outscored 12-23 in the fourth as their season ended early, despite 18 points from Raheem May-Thompson.

Elsewhere, London Greenhouse Pioneers advanced to the semi-finals as they came from behind to beat East London All Stars 66-60. The Pioneers opened up a 19-10 lead after the first quarter, but saw their early advantage turn into a slender deficit by the end of the third. However, the home side powered clear to take the win with former Greece junior international Dimitris Nikolaou scoring 18 points.

Luke Mitchell netted eight threes on his way to 26 points to help lead Nottingham Hoods to an 80-55 victory over Ipswich. The home side had been beaten twice by their opponents in the regular season, but put together a pivotal 22-3 second quarter to open up a commanding 21-point lead at half-time. Miguel Lorenzo Leis played a typically important role for the Hoods and racked up 22 points and 13 rebounds to help his team advance to the last four, where they will play the league champions. Ipswich were 16-18 from the foul line, but were held to below 30% from the field. Tom Sadler had 21 points and 11 rebounds.

Thames Valley Cavaliers continued their unbeaten season in D3 after easing past Sefton Stars with a 100-70 victory on Sunday. National Shield Final MVP, Martelle McLemore, went off for 36 points in a typically explosive display for the South division winners. The Cavaliers will meet Doncaster Danum Eagles in the semi-finals after the D3 North runners-up recorded an impressive 105-74 victory over Oxford Brookes University. Matthew Martin put up a game-high 31 points to lead his side with Liam Knapp contributing 24 points. As for Oxford, Abdoulaye Sylla top scored with 23 points, but it wasn’t enough to help last season’s Division 4 playoff winners advance.

Team Newcastle University may have lost their first league game in two years to finish the regular season, but they have their key pieces back for the post-season and began with an 82-61 victory over Team Solent. Meanwhile, Brunel Ducks prevented an all North division clash in the semi-finals as they defeated Newcastle Under Lyme College Knights 93-74. Benji Lawmann top scored for the Ducks with 22 points as the hosts managed to counter a 35-point haul from Kieran Jones.

The fairytale run of 15th seeds of Kent Crusaders II continued in the NBDL quarter-finals at the weekend as they followed up their defeat of South-East group winners Greenwich Titans (2) with a 74-63 success against Preston’s College Titans. The game was tied at 35 at the half, but the Crusaders pulled away in the third and never looked back. Tumi Olojede top scored with 18 points, while recent ABL Final MVP Moses Byekwaso had 19 points in vain for the Titans.

Top seeds Gateshead Phoenix advanced with a 79-65 win over Sheffield Hallam Sharks after holding the visitors to six points in a pivotal third period. James Nicholson was the top scorer for the Phoenix with 20 points. They will face Sussex Bears in the last four after the South group winners saw off Cardiff Met Archers with an 87-70 victory. Hank Rivers and Bud Johnston combined for 62 points in the win to steer the Bears to success.

University of Chester made a bright start in their home quarter-final against Southwark Pride and held on for an 85-77 win. Phil Brandreth led the way with 28 points, while Niel Gillard provided valuable support with 23 points. The visitors were led by Shaquille Walters, who poured in a game-high 29 points, but it’s UoC who advance to a semi-final clash away at Kent Crusaders II.