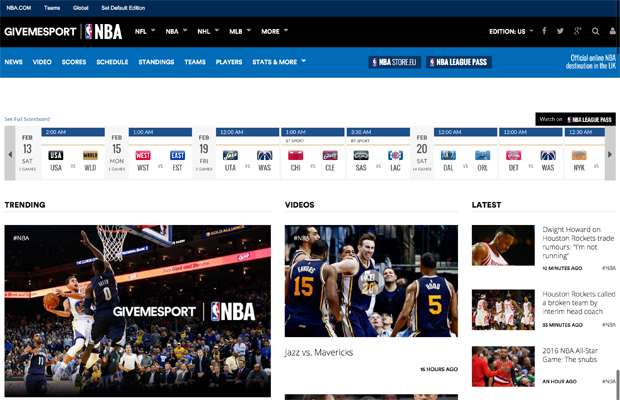 NBA fans across the UK were left disgruntled this week after a redirect was put on NBA.com, pushing users to givemesport.com/NBA, in an attempt to provide more targeted content to British fans.

It comes following an official partnership with GiveMeSport – who have no track record for basketball coverage in the UK – being announced in January.

Followers and fans alike have been quick to lambast the move, having no choice to but to visit the new site, with no option to access the old NBA.com.

On the official announcement post on the site, there are a string of expletive laden comments (NSFW), meanwhile a number of people have taken to Twitter to voice their views.

For reasons I cannot fathom at all, access to https://t.co/1N4fIi6PEr in the UK appears to be now blocked, re-directing to a 3rd party site

@Hoopsfix From a Spaniard living in the UK: they did the same in Spain a couple years ago. Head-scratching moves from the NBA.

What on earth have @NBA done?! https://t.co/zieONsUnQX goes to third party site now if you live in the UK. Taking away choice is bad move.

It seems as though the UK is just the latest country to have geo-targeted content, with fans in Spain and Australia and Brazil saying they have had to deal with the same.

The official release on the move, that went out in January read as follows:

The National Basketball Association (NBA) has partnered with GiveMeSport for the launch of GiveMeSport.com/NBA, the NBA’s online destination in the UK.

The site, which will be launched in the coming weeks, will be hosted in an NBA section of GiveMeSport.com and will feature multimedia content including videos, highlights, editorial and statistics.

GiveMeSport’s editorial team will provide blog posts, analysis and commentary and fans who visit NBA.com in the UK will be automatically redirected to GiveMeSport.com/NBA.

Fans will be able to access individual team pages featuring the latest news and highlights from all 30 NBA teams. The website will also support grassroots events in the UK in the offseason and feature regular promotions and sweepstakes with the chance to win NBA prizes.

“We are excited to partner with GiveMeSport.com on the NBA’s new official online destination in the UK,” said NBA EMEA digital director Xavier Bidault. “By partnering with GiveMeSport, one of Britain’s key sports news hubs, we will provide fans in the UK with an enhanced NBA experience through localised content.”

GiveMeSport CEO Nick Thain added: “GiveMeSport is pleased to announce this comprehensive digital partnership with the NBA, one of the world’s leading sports leagues. This deal highlights the calibre of partner we are looking to work with, and we’re excited to bring the NBA directly to the British sports fan.”

Hoopsfix is awaiting response to a request for comment from the NBA.