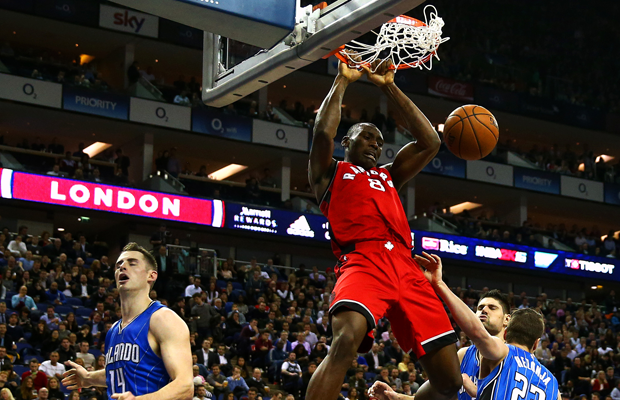 Toronto Raptors and Orlando Magic put on a show in the latest edition of NBA’s Global Games in London as the Canadian side claimed a 106-103 win in overtime at The O2 Arena.

Having been down by as many as 14 points, the Magic rallied and scored the final five points in regulation to force the extra period with the crowd truly coming alive in the closing stages.

Kyle Lowry helped the Raptors get over the line in overtime and he finished with 24 points, eight rebounds and seven assists including 12-of-14 from the free throw line in 47 minutes.

Man I loved the energy tonight in the O2 arena in London. Great fans of them game. Really enjoyed this trip.. Good win tonight. #north

However, Lowry and backcourt partner DeMar DeRozan struggled to find their range in London after going a combined 9-39 from the field, while back-up guard Cory Joseph provided a much-needed spark off the bench and went 9-of-11 in his 19 points.

Despite Orlando being the assigned ‘home’ team for the game, it was Toronto who received the larger share of the crowd’s support, until the traditionally British backing of the underdog as a tense finish ensued.

Victor Oladipo – who led Magic with 27 points – set the tone early on with the opening score from beyond the arc, and it quickly became apparent that this game would be much more competitive than last year’s encounter.

Toronto capitalised on their opponent’s foul trouble in the first, and through the hot-hand of Joseph off the bench, they used a 16-0 run to turn an 18-15 deficit into an 31-18 advantage by the end of the opening period.

Jason Smith – who played for the New York Knicks in London last season – came into the game and knocked down his first three shots in quick succession and he would end up with 16 points courtesy of a number of mid-range jumpers.

Orlando closed to within three on a Tobias Harris triple, but equal responses from Lowry and Argentine Luis Scola helped their side maintain their lead, going into the half-time break with a 61-54 cushion.

On more than one occasion in the third, Toronto threatened to pull away, but were kept in check by the Magic and they managed to reduce the gap to just four ahead of the final quarter with a late run.

An 11-4 start to the fourth put the Raptors back up in double-digits, although they still wasn’t enough. Behind an awoken crowd, Orlando put together a 9-1 response with Evan Fournier scoring seven points in the run to set up an exciting finale.

Oladipo made it a one-point game with another three, before DeRozan and Lowry helped push the lead back up to five with a minute left on the clock. An and-1 drive from Nikola Vucevic followed by an Oladipo jumper tied the game at 96, and it was Orlando who had the final chance to steal the win, missing twice as overtime beckoned.

A third triple from Patrick Patterson capped a 7-2 start to the extra period for Toronto, and they would hold a five-point advantage inside the final minute as Lowry continued to hold his nerve from the line.

Once again, Oladipo fired in from downtown to raise the possibility of double overtime, but his turnover on the next possession allowed Lowry to go to the line, making 1-of-2.

However, with Magic out of time-outs, it was left to Vucevic to send up a half-court heave which rimmed out to bring an enthralling encounter to a close.

Seven Raptors players hit double figures in the win as they improve to a 25-15 record in the Eastern Conference with DeRozan adding a double-double of 13 points and 11 boards.

For the Magic, Fournier had 21 points behind Oladipo’s 27, while Vucevic and Tobias Harris tallied double-doubles with 17 and 16 points respectively along with 11 rebounds apiece.