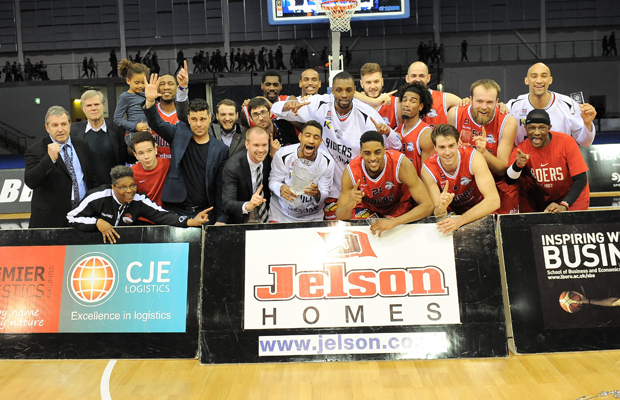 It was fifth time lucky for Leicester Riders as they finally got their hands on BBL Trophy silverware with an 85-77 victory against Newcastle Eagles, at the Emirates Arena on Saturday afternoon.

Riders led by as many as 17 points in the third quarter, and just like they did to win the BBL Cup Final, the Eagles battled back, however this time there would be a different ending.

GB captain Drew Sullivan was hugely influential for the Riders, finishing with a game-high 22 points including some crucial baskets in the fourth to earn the MVP award, however, he was quick to deflect attention elsewhere, giving credit to Neil Watson and Conner Washington.

“Tonight showed massive maturity from the guys on our team and in particular Neil (Watson),” said the veteran star.

“It probably won’t get talked about much or even that noticed, but Neil has been sick all week but he really wanted to play in this game and he was desperate to win this Trophy.

“But he had enough understanding to know that he couldn’t give us what we needed today.

“He basically turned it (the responsibility) over to Conner (Washington) who took up the challenge and he did a great job in his absence.

“That is exactly what we needed.

“I think that shows the depth of our team, but it also shows that maturity too.”

“I sensed our belief and loved our work out the night before and I always thought we were ready to go.

“We had guys down but always believed that someone else could step up and Conner (Washington) did a heck of a job for us. He can handle the ball and played 36 minutes in a major Final for us.

“Last Saturday night I was in the hospital watching a statcast and it wasn’t fun. But, to turn it around a week later with the birth of my daughter and then to grab this Trophy with such a special group of guys, means it is one of those weeks in life that you will never forget.”

Tyler Bernardini netted nine first quarter points, helping Leicester into a 16-5 lead midway through the opening period, before the Eagles responded with a 10-0 run.

The game was tied at 26 early in the second before nine unanswered points saw the Riders regain control, and Conner Washington’s basket before the buzzer helped his side go into the half-time break with a 12-point cushion.

Wright increased the gap to 17 points with a three to make it 49-32, but the Eagles began to find their range from downtown to mount another resilient fightback.

Late in the third, Rahmon Fletcher connected with two big triples to cut the lead to six, and the momentum remained with the defending champions as they started the final quarter with an 8-2 run.

On three occasions, the lead was cut to a single point, but the Riders held firm and extended their advantage to six points, only for Scott Martin and Joe Chapman to connect with back-to-back triples to tie the game at 72.

However, Sullivan replied yet again with another three of his own to put his side back ahead – and this time for good – sparking an 8-0 run as Riders kept their opponents scoreless in a vital spell before closing out the game from the foul line.

Fletcher led the Eagles with 18 points, but their quest for a second consecutive clean sweep was ended in Glasgow.