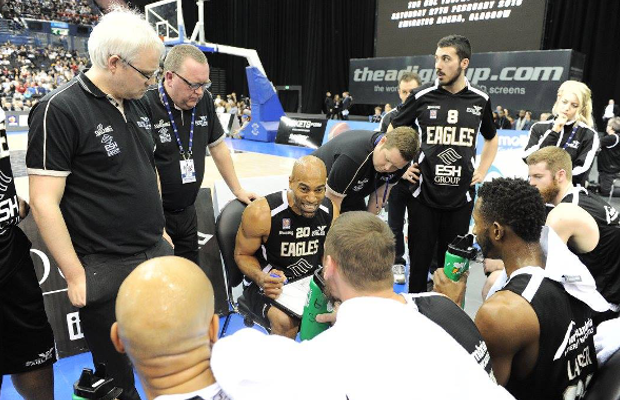 Newcastle Eagles are into yet another BBL Final after seeing off Worcester Wolves 88-94 on the road in their Trophy semi-final second leg for an overall 167-154 aggregate victory. Despite being without Scott Martin, Darius Defoe and Stuart Thomson, the Eagles racked up 57 points in the first half to move out of sight, before Worcester produced a late rally to close within five. Rahmon Fletcher had 25 points and nine assists, while Andy Thomson finished with 24 points, 14 rebounds and five assists in an impressive display.

The Eagles had recorded their 20th league win on Friday night after overcoming a slow start to defeat Plymouth Raiders 104-90 at Sport Central. Charles Smith was instrumental with a remarkable 34 points and 16 rebounds as well as four assists and three blocks, while Andy Thomson had 24 points and Fletcher dished out seven dimes to go with 17 points. The Raiders led by two at the end of the first, but were unable to maintain their advantage even with Duane Bailey’s 25-point effort.

The second BBL Trophy semi-final hangs in the balance after Leicester Riders and Sheffield Sharks played out a 79-79 draw at the LCS Arena. Riders were up by five with 90 seconds remaining, but the visitors produced a 5-0 close to leave the tie all-square ahead of Wednesday’s second leg. Jerrold Brooks connected with seven triples on his way to 24 points, while TJ Robinson had 22 including the game-tying basket with 19 seconds left. For Leicester, TrayVonn Wright posted a double-double with

Leicester had continued their strong form in the BBL Championship on Friday night after finding their way past Bristol Flyers on the road, with a 55-66 success. Cardell McFarland had 21 points to help Bristol push the visitors close, despite the absences of Tyrone Lee and Doug McLaughlin-Williams. For the Riders, Drew Sullivan top scored with 12 points, while Neil Watson and Shane Walker had 11 points apiece.

Elsewhere, Sheffield were also victorious in the league as they returned to winning ways with an impressive 69-81 victory away at top-four rivals Worcester. Brooks led the way with 19 points as five players hit double figures in total. The Sharks were down at the half, but produced a strong second half display to come away with the win. Jay Couisnard netted 19 for the Wolves as they suffered their eighth league defeat, although they remain third.

Daryl Corletto’s Plymouth side bounced back from Friday’s loss in the North-East as they overturned a seven-point half-time deficit to beat Surrey Scorchers 64-73 at Surrey Sports Park. The home side pulled away in the second to build a solid cushion at the break, but the Raiders changed the game in their favour with a dominant third period and held on in the fourth to stay in the top eight. Cory Dixon was key with 18 points and 14 boards in the win.

Scorchers had pulled off a stunning comeback on Friday after battling back from 25 points down to claim an 82-90 win away at London Lions. The visitors were down 21 at the end of the third, but produced an incredible 35-6 final quarter to complete the turnaround for their first victory of 2016. KC Ross-Miller netted 26 points including 13-of-14 from the line, and also provided eight assists for his team-mates. The Lions were led by Alex Owumi’s 22 points as they built a strong position, before their collapse in the fourth.

Also, on Sunday, Cheshire Phoenix performed their own fightback after defeating Glasgow Rocks 90-81 at home having come back from as many as 16 points down. Danny Huffor had 24 points and nine rebounds in another strong display against his former side, while Americans Akeem Ellis and Quincy Taylor added 21 and 20 points respectively to help take the head-to-head in the series. Will Hall netted 18 for the Rocks as they dropped to below .500 in the league after spurning an early 8-24 advantage.