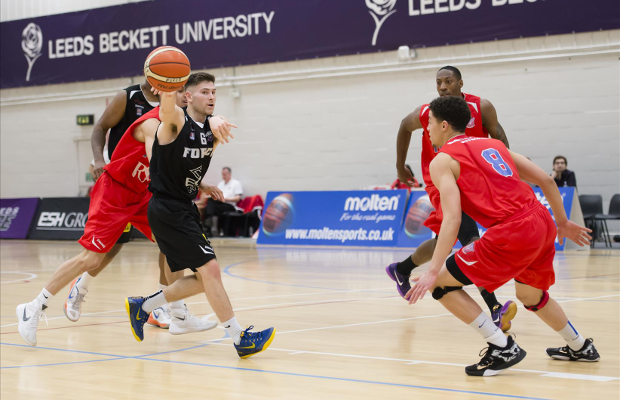 The battle for the title and the race for the playoffs look no closer to being settled after another dramatic weekend in the BBL.

Newcastle Eagles battled back from five points down in overtime to defeat London Lions 83-81 at Sport Central, on Friday night. Scott Martin top scored with 18 points including the go-ahead triple in the extra period, while Rahmon Fletcher handed out 10 assists to go with 15 points. The Lions edged ahead at the half, but needed Demond Watt’s basket in the final 10 seconds to force overtime. Jamal Williams had the hot hand early on and finished with 23 points.

Last week’s BBL Trophy winners Leicester Riders were quick to re-close the gap as they defeated Surrey Scorchers 91-74 the following evening. Jamell Anderson top scored with 20 points including some timely 3-pointers, while Neil Watson marked his return to the starting five with a 12-point, 10-assist double-double. The Riders trailed early on, but powered their way to another win at the LCS Arena.

Also, on Friday, Worcester Wolves temporarily moved into second after seeing off Leeds Force 92-91 in an overtime thriller on the road. Jordan Aaron impressed on debut with 23 points as the Wolves denied the home side a memorable win in their quest for the playoffs. Pavol Losonsky added points for the visitors, with Leeds led by Marek Klassen’s 26-point haul.

Meanwhile, Plymouth Raiders moved a step closer to securing their long-awaited return to the post-season as they earned an 82-77 victory over Sheffield Sharks. Cory Dixon top scored with 26 points and collected 12 rebounds, while player-coach Daryl Corletto added 23 points and handed a debut to Croatian guard Dino Butorac. TJ Robinson came off the bench to post 19 points and 13 rebounds, but the Sharks let slip a narrow lead heading into the fourth.

The weekend went from bad to worse for fourth placed Sheffield as they were then beaten 69-65 by Bristol Flyers 24 hours later. Cardell McFarland top scored with 15 points as Greg Streete hit a dagger three late on to give the Flyers’ playoff hopes a boost. Mike Tuck had a game-high 16 points in vain for the Sharks as they fell to their third straight league defeat away from home.

Glasgow Rocks closed in on the top four after February’s Player of the Month, Kieron Achara led his side to a 77-69 victory over Manchester Giants. The home side were pushed all the way, but were able to close out the win down the stretch with Achara finishing with 21 points and nine rebounds. For the Giants, Stefan Gill had 16, while Jerelle Okoro produced another impressive display with 15 points and 12 boards, though their side remains bottom.

Finally, Cheshire Phoenix moved further clear in the race for the playoffs after coming from nine points down to beat Surrey Scorchers 81-74. Akeem Ellis top scored with 23 points, and added eight boards and five assists as the hosts used a 17-2 run in the fourth to power past their opponents and take the victory. Tayo Ogedengbe scored 10 of his team-high 18 points in a 14-2 run in the third to help his side build a nine point lead, but they were unable to hold on.