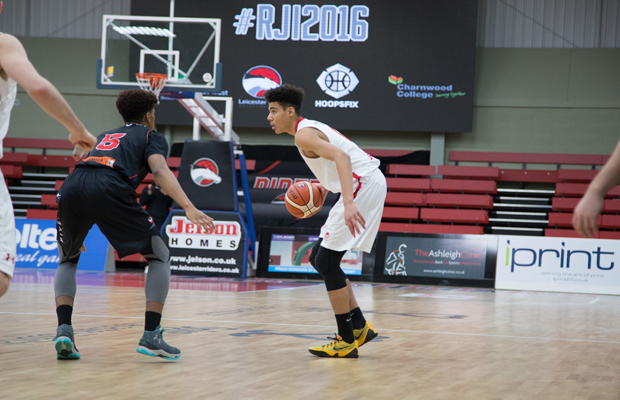 England Under-16s fell to a 67-49 loss at the hands of Charnwood on Tuesday afternoon in the Riders Junior Invitational at Leicester Community Sports Arena.

Charnwood seized control of the game early led by former England Under-18 Andre Arissol, who had 14 of his 18 points in the first half as England found themselves in a 17 point hole by halftime.

A spark off the bench provided by Josh Ogundele, who finished with 7 points and 9 rebounds in just 11 minutes, saw England make a small fight back early in the fourth but Charnwood remained in control until the final horn, seeing their lead stretch to more than 20 at times.

Daniel Ogoro and Robert Banks, who made his debut, led England with 9 points each, while Richard Amaefule finished with 7 and 4 blocks.

“For us, it was difficult to get anything from that game,” England Under-16 Head Coach Alan Keane said afterwards.

“Primarily going against a zone defense for 25 minutes when we’ve only been together twice; we’re clearly not prepared to go up against a zone in just our second camp, so it’s a bit frustrating.

“Defensively, there were a lot of concerns for us in terms of guarding the ball, and also I was a little bit disappointed with our boxing out. We missed a lot of box outs that really cost us in the first half. Coming out of time outs and in the second half we showed we could be better in those moments, we just need to be more consistent.”

Charnwood were led by the aforementioned Arissol, while Thomas Yome had 17 and Henri Langton added 14.

“I thought our attitude and mindset was a lot better towards today’s game,” said Charnwood Head Coach Josh Merrington.

“I asked the players to set themselves some targets ahead of the game which I could hold them accountable to and for the most part I think that really helped to focus them.  It was a lot stronger of a performance today.”

England wrap up the event on Wednesday when they face Ireland Under-16s, as Keane maintains that defence will remain their focus.

“We want to build our on ball defence, for us everything starts and ends with that,” Keane added.

“If we play good on ball defence we can disrupt their offence which shortens the clock on offence for them. If we don’t play good on ball defence, we’re forcing rotations, we’re out of sync and out of shape on defence and we’re probably leading to missed box outs and poor close outs. On ball defence is huge for us, it always is, especially when you go to Euros. If we can nail that we’ll build on everything else from there.”

Ireland U16s vs Wales U18s
Ireland Under-16s got a 63-81 victory over the Wales Under-18 squad, to round out Wales’ involvement in the event.

Ireland controlled the game from start to finish, and responded to every surge from the Welsh squad, including in the fourth quarter where they refused to go down without a fight.

Morgan Carter had 13 points for Wales, with Horrigan having 9 and Etherington adding 7.

“For us it’s a case of we’ve got 15 players and we know that only 12 are going to make it to the next stage of the re-selection and represent their country,” Ireland’s Head Coach Nabil Murad said after the game.

“It’s great to play that physical competition, it’s great to see what the boys can deliver on the court and gives us an idea of what we need to work on. As much as it’s great for us to get the win, for us it’s also about looking at some of the other aspects of the game.”

On Wednesday, Ireland will take on England Under-16s in the final game of the Riders Junior Invitational.

“It’s big for us because obviously the England u16s, they came down from the A Division, they know what its like,” Murad added.

“Alan Keane is returning as a coach so he knows, he’s experienced. Obviously we expect a lot of good things tomorrow and it’ll give our boys an idea of exactly what level it is. Playing against bigger, physical teams, playing against more athletic players, playing against coaches that are more experienced, will show our boys and show us as coaches what we need to do to be ready for that level.”