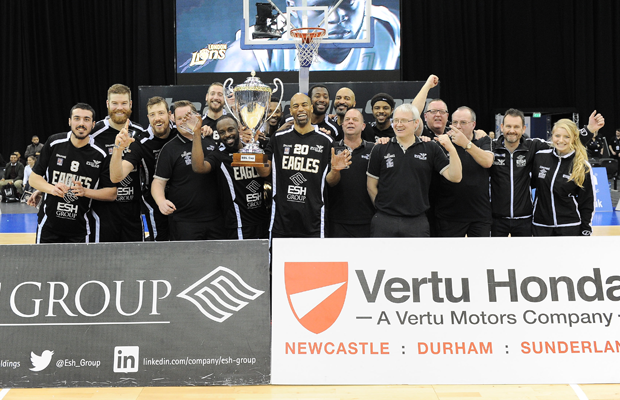 Newcastle Eagles completed an impressive comeback from 14 points down to secure a 94-82 victory and claim the 2016 BBL Cup on Sunday afternoon at the Barclay Card Arena in Birmingham.

Two years ago the Riders used a late run to beat Newcastle in the Cup Final and on this occasion the Eagles returned the favour, outscoring the Riders 15-5 in the last five minutes to seal victory.

Rahmon Fletcher (pictured below) was instrumental for his side, and picked up the MVP award for the second year in a row with 18 points along with four assists. 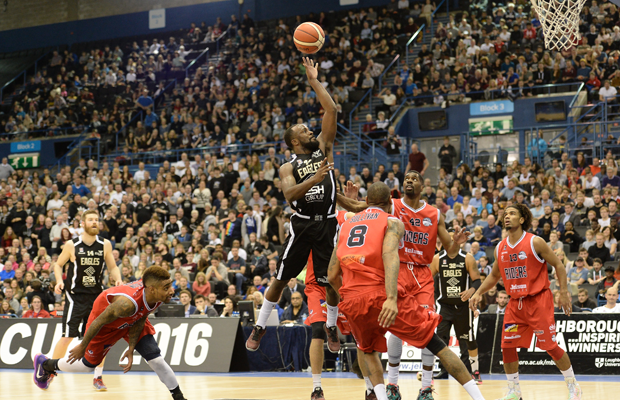 “It’s what everyone wanted, regardless of the win, everyone wanted to see what would happen between ourselves and Leicester,” said Eagles Player-Coach Fab Flournoy.

“I think there is another level for ourselves and Leicester to go to. It was a huge learning curve for both teams because we hadn’t played each other. It came down to tactics, it came down to making sure that everyone was prepared and knew their assignments. Neither ourselves nor Leicester were going to run away with it, it just wasn’t going to happen.

“It was probably the most intense Final, that I have been a part of in the past 10 years.”

“They (Leicester) are a tough team. They were well prepared for us and I think it says a lot about us that we had our back against the wall and we knew that we could play much better. We knew that we took their best shot in the first half and like Fab said, in the fourth quarter, we just had to step on their throat.”

Defences were expected to be key leading into the anticipated showdown, but both teams found ways to execute on the offensive end in a high scoring opening period with Riders finding most of their success inside to build an early advantage.

Joe Chapman had closed the gap with seven of his 17 points in quick succession, before Charles Smith scored four of the opening six points in the second to fire Newcastle in front.

TrayVonn Wright began to display his athleticism with four dunks on his way to nine points in the quarter, while Conner Washington provided his usual spark from the bench with five points to help Leicester into a double-digit lead at 50-39 before the half.

Eagles had gone 2-of-14 from 3-point range in the first half, and although they shot better from beyond the arc in the third, the Riders matched their opponents and appeared to be pulling away as they opened up a 14-point cushion

However, back came the defending champions and all of a sudden it was a two-point game on the back of a 12-0 run. The comeback was complete in the early stages of the fourth as the Eagles moved ahead with Drew Lasker scoring four points in a 7-0 burst.

Leicester kept it close and were down one with more than three minutes still remaining, but the Eagles showed their mark as champions with a title-winning win.

Newcastle had six different players in double figures as they achieved a fifth consecutive piece of silverware in the BBL, and continued their winning streak this season.

Riders’ coach Rob Paternostro was disappointed but quick to pay tribute to the winning side.

He stated, “You have got to give [Newcastle] a lot of credit – I thought they played really well in the second half and whatever mistake you made, they made you pay.”

“From a personal standpoint it was frustrating, not so much the loss, but more the way we conceded it in the second half.

“Not taking anything away from Newcastle, they are the standard in this league, but some of the mistakes we made in the second half allowed them to chip away at the lead.

“I take my hat off to them, they stuck to their gameplan for the full 40 minutes and, as a group, we have to learn that is how you win championships.”

Sullivan and TrayVonn Wright led Leicester with 14 each, while Neil Watson had 10 assists to go with his 7 points.