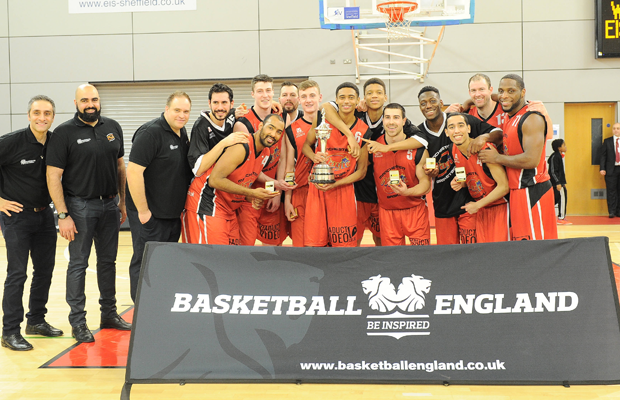 Manchester Magic made it back to back National Cup titles after an 97-84 impressive come from behind victory over Worthing Thunder on Sunday afternoon at the EIS, Sheffield.

Despite being down as many as 20 in the opening two quarters, Manchester opened up the second half on a 14-1 run to come storming back into the game and take the lead with five minutes to play in the third.

Eventual MVP Ellis Cooper, who had struggled in the first half, took over, scoring 15 of his game-high 28 in the fourth quarter, adding 10 rebounds and 5 assists in the game.

“We just said to them, ‘look, people out there are gonna think, Manchester, they’ve got ego, look at them now, someone puts up a fight and they don’t want to fight back’,” Magic Head Coach Paul Middleton said after the game of his halftime talk.

“And that’s not the case, we have no egos, we have people that came today nervous. The pressure of (having won) last year, I don’t know, but they (Manchester) were nervous.

“Worthing were unbelievable in the first half, they shot the lights out, defensively they were good and we just had to fight back. We didn’t attack, when wouldn’t pass the ball inside and when we did we wouldn’t attack.

“(It was our) Worst defensive display all year, we’ve got the best defensive record in the league and we didn’t show it today. We knew what we had to do, they (the players) knew, they knew. They came out fighting. Ellis was at the forefront of that and he just does it with everything he says and everything he does on the floor.”


Having already lost Tomas Seduikis to foul trouble, when big man James Cambronne was called for his fifth foul with seven minutes left in the game, Worthing’s fate was sealed.

“Our shot selection was great, the defence as a team was solid and our game plan worked, it was flowing.

“Manchester though are a well-coached team and they were always going to come back and unfortunately our shots didn’t drop, our composure dropped and we got sloppy. But it was a great occasion for the club, a great day out for the fans and it’s a shame that we can’t travel back to Worthing with a trophy.”

Magic took advantage of their size, out rebounding Worthing and outscoring them in the paint 60-28.

“We just had to slow down,” MVP Ellis Cooper said of what changed in the second half.

“We came into the game taking it a little bit for granted that they’re seeing us as the team that should win but they didn’t back down one bit and we didn’t react well to it.

“It was first time all season we were down at the half like that and we realised we had to regroup and that it starts on the defensive end and that was what won us the game.”