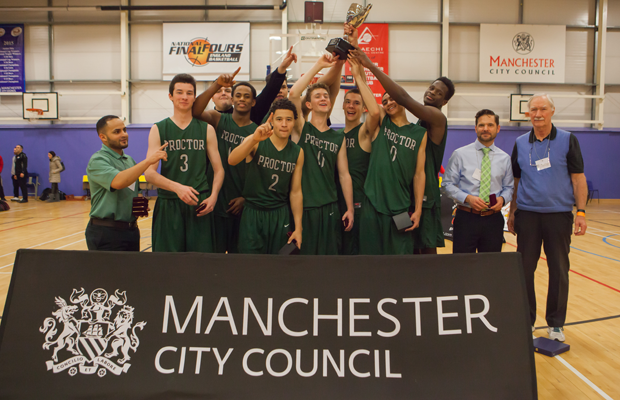 Proctor Academy avenged their group stage loss to England Under-18s when it mattered most, with a 82-63 win to claim the 2015 Haris Memorial Title on Tuesday at the Amaechi Basketball Centre in Manchester.

Unlike their first match up where England had early control, Proctor asserted their authority on the game immediately jumping out to a 12-2 lead and not giving it up the rest of the way.

Though England remained in striking distance throughout, getting the lead down to single digits in the third period, a lack of urgency sealed their fate as it turned into a blowout in the fourth quarter.

Eventual tournament MVP Caleb Green was neutralised by England, being held to 4-17 shooting, but instead went to his passing game, dishing 9 assists as Tshiefu Ngalakulondi went off for 27 points and 11 rebounds as well as a number of highlight plays.

For England, Luke Mitchell had 15 points on 6 of 12 shooting in the final, rounding out an impressive performance across the three days in Manchester to be named to the All-Star 5. Centre Sam Japhet-Mathias finished with 17 points and 9 rebounds, while Zion Tordoff and Jacob Iwowo joined them in double figures with 11 each.

England finished 4-1 at Haris 2015 but ultimately were unable to win back the title they claimed in 2010 and 2013. Regardless, Head Coach Steve Bucknall felt it was an important step in the team’s preparation for the 2016 Division B European Championship.

“The Haris tournament is always a well organised affair which offers the under-18 programme an opportunity to play in a local competitive environment where we can continue with our selection process,” Bucknall said after the tournament. “The team had little prep but we were pleased with the performances of the team.

“Our strength was our depth and continued development on individual and team defense. We were pleased with everyone’s desire and effort but Luke (Mitchell) and big Sam (Japhet-Mathias) showed their quality throughout. The conversation of Zion (Tordoff) and Emmanuel (Odunsi) to the small forward position, (it) was good to see how they grew into this position.”

England U18s vs Charnwood (semi-final)
England escaped a scare from Charnwood to take a 60-55 win and book their place in the final.

A late three pointer that would have tied it up from Charnwood’s David Issekya bounced off the rim, and England knocked down their free throws to seal the victory.

England jumped out to a 27-11 lead before Charnwood got back into the game early in the second half.

Tim Fava led Charnwood with 12, while Thomas Yome had 11 and David Issekya and Morgan Carter added 8 each.

Turkey U17s vs Proctor Academy (semi-final)
Proctor Academy came away with a 72-87 win over Turkey to book their place in the final, in a game that was closer than the final scoreline suggests.

Neither team were able to get separation and it wasn’t until the final 3 minutes that Proctor pulled away, completing a number of highlight plays on the way.

Unlike their group match up where Charnwood led the majority of the game until Turkey took the lead in the final minutes, in this one Turkey controlled from the outset, but managed to hold on, putting the game out of reach in the fourth quarter.

Erkin Senel had 17 points to lead Turkey, Sinan Saglam added 16 and Troy Selim Sav and Burak Tursen finished with 12 each.

Scotland U18s vs Osona (5th Place Game)
Scotland picked up the 76-63 win over Osona and claim 5th place at Haris.

Scotland controlled the game throughout, leading by as many as 18 to take fifth place in the tournament.

Kyle Jimenez continued his solid scoring efforts in the tournament with 23 points, Sean Nealon-Lino had 22, while Konrad Kantorski finished with 11.

Magic jumped out to an early lead and never looked back, dominating throughout to register the victory over the Irish side.

Hamad Ali returned to finish with 15 points, Kaiyem Cleary had 14 while Arman Najafian finished with 10.

Scotland U18s vs Sligo All Stars
In the opening game of the day, Scotland Under-18s got a 83-62 victory over Sligo to advance to the fifth place game.

Scotland led by just 5 at halftime but extended it to 15 by the end of the third to cruise to the win.

Kyle Jimenez led Scotland with 22, Konrad Kantorski had 15 while Ryan Armour finished with 12.

Oisin O’Reilly led Sligo with 21, Shane Mooney had 15, while Luke Cromy and Luke McLoughlin added 7 each.

Osona appeared in control before a late Magic run saw them reduce the deficit in the final minutes but were unable to get over the hump, with missed free throws and Kaiyem Cleary fouling out sealing their fate.

Jaxon Wroe led Manchester with 15, Michael Anumba had 11 and Kaiyem Cleary joined them in double digits with 10. 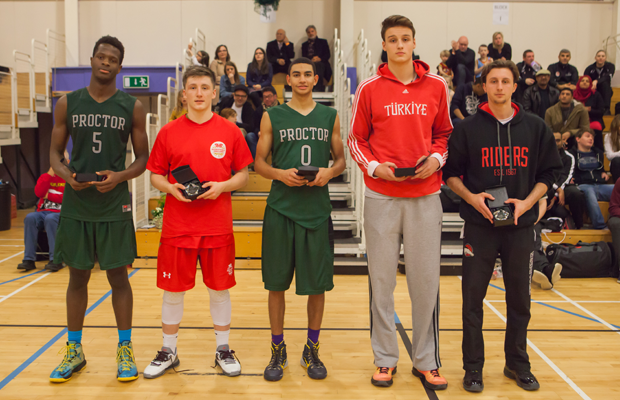 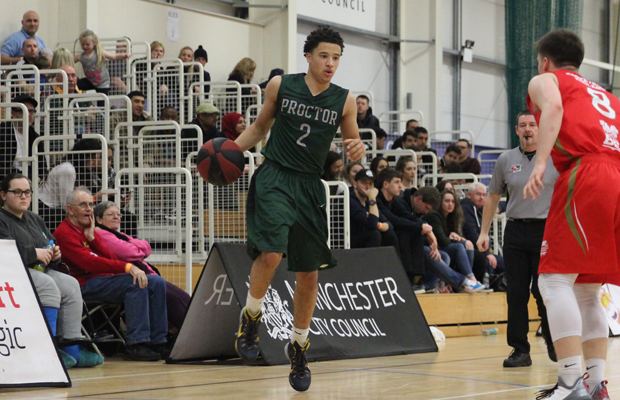 Proctor Academy’s Caleb Green was deserved MVP winner, having the tournament high of 34 points on opening day, while averaging an impressive 21.6ppg over Proctor’s 5 games.

He finished with games of 34, 25, 22, 27 and 11 points, respectively, using his quickness to get to the hoop, while knocking it down outside jumpshots.