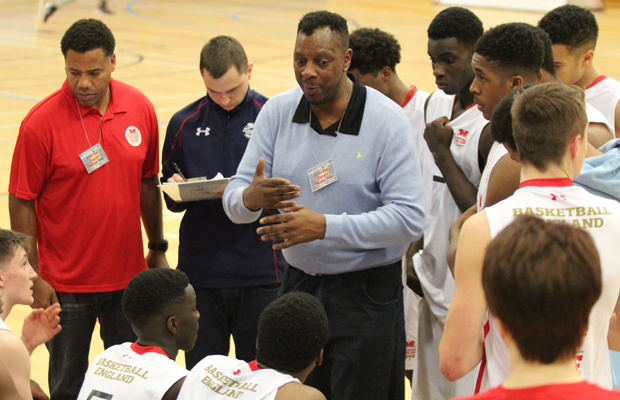 The 2015 Haris Memorial Tournament tipped off on Sunday night, seeing 8 teams from across Europe & the USA take to the floor at the Amaechi Basketball Centre in Manchester

The final score was not reflective of the game however, as Scotland hung around until midway through the third quarter. The final 15 minutes proved to be a blowout, with England extending their 10 point lead to the final deficit of 36.

Wake Forest commit Sam Japhet-Mathias had little trouble against the smaller Scotland side on his way to a game-high 18 points (see big putback dunk below), Myerscough’s Zion Tordoff added 14, while Kent’s Daniel Akin had 11, as Bucknall rotated often throughout.

Sean Nealon-Lino had 16 to lead Scotland, who used their three point shooting to stay in it, Kyle Jimenez had 15 and Konrad Kantorski added 8.

Charnwood vs Olost
It was a similar story for Charnwood against Spanish club side Olost, pulling away in the second half for an 81-55 victory.

With the game tied at 35 at the half, a 25 point third quarter from Charnwood saw them get a 15 point cushion that they would ride the rest of the way.

For Olost, Xavier Roqueta led with 15 points, Saliou Diop had 10, while Roger Riera finished with 9.

Turkey U17s vs Sligo
It took a while for Turkey to warm up, but when they did it proved no contest, as they got a 110-60 win over a plucky Sligo All Stars squad.

The Turkish side, who feature a number of players who were part of their bronze medal winning side at the Division A U16 Euros this summer, had 7 players in double figures on their way to the 50 point win, but Sligo hung around a lot longer than expected, down just 13 at half time and causing Turkey troubles for the entire first half.

Oisin O’Reilly led Sligo with 20, while Shane Mooney finished with 12 and Jack Moran 9.

Point guard Caleb Green, who is being pursued by handful of Division 1 programmes, had the top scoring outburst of the day, using his speed and quickness to pour in 34 as Proctor held Magic to just 10 points in the final period.

The athletic Tshiefu Ngalakulondi, who also has interest from a number of mid-major Division 1 schools, added 14, with 6’11” Canadian big man Julian Roche having 13.