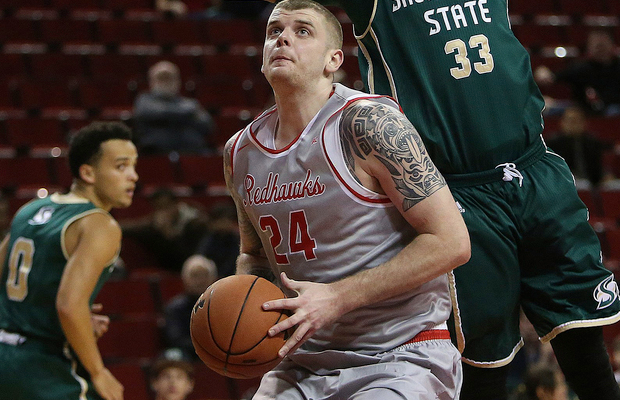 We take a look at how the Brits are getting on in Division 1 in the second week of the college season.

The 6’11” centre had a big week for Seattle after helping them end their losing start to the season with back-to-back victories. Crook scored 17 points and had eight rebounds in a 58-52 success, before scoring 16 on 8-of-11 shooting to lead the Redhawks to a 58-48 win over Great Falls.

Fellow Brit Aaron Menzies provided valuable contributions off the bench with seven points and eight rebounds in the first of two wins followed by season-highs of nine points in 20 minutes. And much has been spoken about the roles of the two bigs and how they can combine together.

“Those two are our tallest guys so if we put them n the same team, then they’re going up against a unit that’s really small,” Seattle University men’s basketball coach Cameron Dollar said this week. “Anytime we can get them some work that’s good for them.”

“He’s got such and advantage over everybody because he’s so big,” Crook said. “The minutes that we get together are valuable. It’s been successful so let’s keep building on it.”

Crook, a three-year senior starter, is a gifted passer for a big man who has deft moves around the basket. Meanwhile, Menzies is a raw talent who is still discovering how to exploit mismatches with his size.

“We’re still trying to find our roles, but the main thing is to keep getting better as a team,” said Menzies, who had nine points in 20 minutes – both personal bests – and five rebounds. “I need to be more aggressive finishing (plays), but I know that will come in time. I’ve just started out. It’s just good to be out there with the team.”

Luke Nelson led UC Irvine to their best start since the 1982-83 season after shooting 6-of-8 fro the field in a 20-point haul, whilst adding six assists in a 79-61 win over Santa Clara to go 4-0. Fellow guard Alex Young had eight points, nine rebounds and five assists in the same game, before scoring a team-high 15 including 8/9 from the line and five assists in a 64-71 loss against Boise State as Nelson had 13 points and six rebounds.

Senior guard Teddy Okereafor posted 11 points and seven assists in a 58-65 loss against #3 Maryland to start the Cancun Challenge. Okereafor would be named to the all-tournament team and led Rider to their first win of the season with 16 points including four triples to beat Houston Baptist 67-56.

Dwayne Lautier-Ogunleye scored a season-high 19 points in a 59-67 loss against Seton Hall in the second game of the Gildan Charleston Classic before contributing six points, four rebounds and four assists as Bradley were beaten 60-62 by Towson. DLO also had nine points in a 51-64 reverse against New Orleans – making it five straight defeats for the Braves since their opening win.

Western Kentucky went 1-3 in the Gulf Coast Showcase this week with Ben Lawson producing his best display in an 88-60 win against Central Michigan with four points, 12 rebounds and three blocks in 18 minutes. He also picked up three rebounds in a 73-81 loss against Duquesne – who have Josh Steel on their roster.

A game-high 21 points from Grant Fiorentinos couldn’t prevent SIU Edwardsville falling to a 67-87 defeat against IPFW on Saturday. Fiorentinos hit double figures again on Tuesday, bagging 13 points and five rebounds as the Cougars slumped to a third successive after being narrowly beaten 77-74 at home to Campbell.

Lehigh’s Jesse Chuku bagged seven rebounds and five points as the Mountain Hawks succumbed to a 54-80 midweek defeat to #12 Virginia. Despite notching 14 points on Sunday against Columbia, Chuku remains winless with the Mountain Hawks after their 0-5 start to the campaign.

Jamie Batish came off the bench to finish as Western Illinois’ third highest contributor on nine points as the Leathernecks continued their unbeaten start to the campaign; dismantling Illinois rivals, Trinity Trolls 79-44 on Wednesday.

Elsewhere, Clive Vaughan Jr played a role in back-to-back wins for Morgan State as they moved to 2-3 for the season. He notched nine points in the narrow 66-62 win over Goldey-Beacom, before hitting double figures to land 12 points as his side edged out Campbell 59-54 to breathe life into their faltering start to the campaign.

Meanwhile, Josh McSwiggan is facing the prospect of having to sit out the entire year after the NCAA ruled him ineligible. UTEP are appealing the decision.