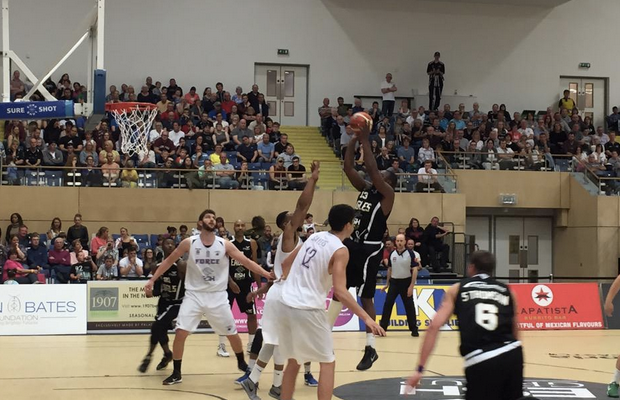 Check out our latest BBL round-up as we recap the seven games to take place in Week 3:

Newcastle Eagles started the weekend by surviving an early scare against Surrey Scorchers before powering their way to a 98-65 triumph on the road. Will Neighbour made a blistering start with a three consecutive 3-pointers, on his BBL debut, in a 15-3 start for the Scorchers. However, the defending champions would respond with the final 10 points of the first quarter and a commanding third period saw them outscore their opponents 28-7 to all but secure the win.

Scott Martin passed 1000 career BBL points with his 26-point haul as six Newcastle players reached double figures with Andy Thomson adding a double-double of 19 points and 13 rebounds. Neighbour finished with 16 points and 10 rebounds for Surrey, while Desmond Lee also made his debut and added 13 points in the defeat.

Fab Flournoy’s side made it three wins from three on Sunday when they recorded a comfortable 91-63 win over Leeds Force in their opening game at Sport Central. Darius Defoe led the way with an 18-point haul as the Eagles inflicted a third straight defeat on the visiting Force, who were still without a couple of players for their weekend double header on the road. Clayfell Harris had a team-high 14 points for Leeds, but they were never able to recover from a slow start.

London Lions also produced a dominant display against Leeds Force, on Friday, as they picked up their second win with a 99-60 victory at the Copper Box. Demond Watt went 7-8 from the field for his 19 points in a balanced scoring effort that saw four other players hit double figures. The visitors were still without a couple of players and were unable to re-create their memorable win in the capital back in February. GB international Zak Wells continued his strong start with 23 points, although there was little outside help as Force ended up 3-18 from beyond the arc.

Leicester Riders made a strong statement of intent as they opened their season with a dominant 88-54 victory over Worcester Wolves. TrayVonn Wright led the way in a strong team defensive display with 25 points and 11 rebounds as the Riders inflicted a first loss on their opponents. Neil Watson added 22 points with 11 of those coming in a blistering minute spell including three straight triples. GB captain Drew Sullivan made his competitive return for the Riders and finished with nine points, 11 rebounds and four assists off the bench.

Pavol Losonsky was the Worcester Wolves hero on Friday night as he sank two late free throws to seal an exciting 78-76 victory at home to Bristol Flyers. The Slovakian international finished with an impressive 29 points and 16 rebounds with team-mate Jay Couisnard weighing in with 22 points as the reunited duo continued their strong start. Wolves’ Spaniard Javier Mugica proved that key contributions are not all about scoring after finishing with a double-double of 13 rebounds and 10 assists despite not registering a single point.

The Flyers had battled back from a double-digit deficit heading into the fourth to take the lead and Cardell McFarland’s triple in the final minute made it 76-73 in their favour before the home side finished with the final five minutes. McFarland top scored again for Bristol with a 24-point haul while Danish forward Mathias Seilund had a double-double of 21 points and 12 rebounds.

It proved to be double disappointment for Bristol Flyers as they went down battling at home to Cheshire Phoenix on Saturday in a 90-82 loss. They had battled back from a double-digit half-time deficit once again, through a strong third period , but Jordan Williams scored seven points in a 9-2 burst that saw Phoenix home down the stretch for their second win. The American forward top scored with 24 points while captain David Aliu weighed in with 23 and Martyn Gayle hit a couple of important three’s in his 15-point effort. McFarland had 23 points and nine assists for Bristol as the home side finished with 14 made 3-pointers.

Manchester Giants pulled off an incredible late comeback in the final game of the weekend as they defeated Plymouth Raiders 95-89. Trailing by 18 points, late in the third, Yorick Williams’ side hauled themselves back into the game and finished strong to improve to a 2-0 start. Olu Babalola sunk six triples on his way to a game-high 23 points, while Ingus Bankevics added 20 and Callum Jones produced another all-round display with 18 points on 8-11 shooting as well as eight rebounds, five assists and four steals. Dante Williams made a hot start, but saw limited minutes in the second half as he ended up with a team-high 20 points in 20 minutes for the Raiders, who drop to an 0-2 start.