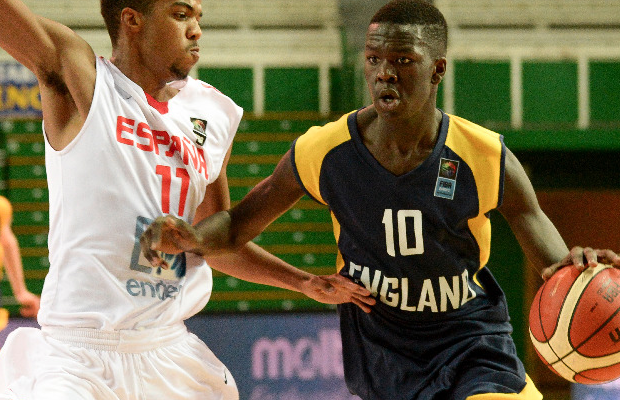 England under-16’s suffered an agonising 66-65 defeat at the hands of Latvia as they were denied the chance to secure their Division A survival at the European Championships, in Lithuania on Friday.

Alan Keane’s side led at the half and had multiple leads including late in the fourth but must now win their final two games to avoid dropping straight back down into Division B.

Nelson Boachie-Yiadom led the way with a double-double of 14 points and 10 rebounds while Jacob Round also added 14 points. Cameron Bett also reached double figures with 11 points as well as dishing out seven assists.

England made a strong opening with Josh Edwards and Boachie-Yiadom bookending an 8-0 start with scores from downtown.

Latvia finally ended their drought past midway before Cameron Bett made it 10-2 with his first points of the game.

However, England endured a scoreless final three minutes as their opponents compiled a 12-0 close including a trio of triples to lead 14-10 at the end of the first.

England quickly levelled with consecutive scores at the start of the second before both teams proceeded to trade baskets in the early stages.

Boachie-Yiadom sparked a 10-2 run with a dunk on the fast break to help his side establish a four-point cushion.

In the final minute, Latvia struck again from beyond the arc but it was England who held on to a slender 35-34 advantage at the half-time break.

Zephi Sharman scored back-to-back baskets to keep England ahead only for Latvia to net twice from 3-point range to take the lead at 42-39.

The lead changed hands three more times before Jacob Iwowo nailed a three in a mini 5-0 burst to help England into a 49-47 advantage ahead of the fourth.

Latvia threatened to break clear at the start of the final quarter with the opening seven points of the period.

However, Round nailed back-to-back jumpshots to bring England within a single point before Boachie-Yiadom tied the game at 54 from the free throw line.

A 7-0 run saw Latvia once again pull away only for Bett and Boachie-Yiadom respond with consecutive scores.

At 62-58 with less than two minutes remaining, Latvia looked to run the clock but the game quickly changed in the space of twenty seconds.

Kayiem Cleary stole the ball at half-court and finished the play with a dunk before Round struck a huge 3-pointer after a defensive stop to put England ahead at 63-62.

The game was level at 64 heading into the final minute after Boachie-Yiadom went 1/2 from the line but another basket for Latvia proved decisive.

Iwowo could only split his free throw attempts to make it a one-point game before Bett almost snatched victory as his off balance 3-pointer attempt rimmed out.

The under-16’s now have to win both of their remaining games to retain their Division A status; starting tomorrow against either Croatia or Israel at 12:30pm (UK time).