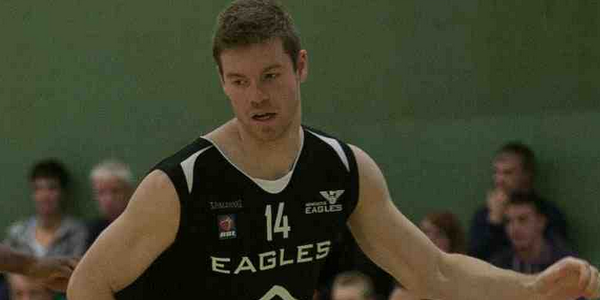 Newcastle Eagles are just two wins away from securing yet another BBL Championship title, and Scott Martin believes focus is key in making sure they don’t fall at the final hurdle.

In theory, the league title could be secured this weekend provided Newcastle defeat Leeds Force and Leicester Riders fail to win either Manchester Giants or Sheffield Sharks on the road.

Injuries are taking their toll at a critical stage with player-coach Fab Flournoy ruled out for the rest of the season, while Rahmon Fletcher, Andre Jones and Drew Lasker were all sidelined for last week’s win against Plymouth Raiders.

And Martin admits he is weary of the physically demanding challenge that lies ahead.

“I’m not sure how much I’m looking forward to it right now because of the injuries we’ve faced with our team, but once we get the guys back it should be an exciting final stretch.

“It’s always tough seeing teammates and friends get injured especially in the way they did, but you understand that it does mean you have to step up your individual play to try and find a way to get the team a win.”

Despite fielding just six players, including academy product Eddie Matthew, on the back of a loss at Worcester Wolves, Newcastle came away from Plymouth with an all-important victory – epitmosing the character of the team.

BBL legend Charles Smith was his ever-reliable self last weekend playing a full 80 minutes of their double-header. At Plymouth, the Trophy Final MVP produced a big-time display with 38 points, 10 rebounds, and six assists.

“I don’t think you can just sum up how good he is,” Martin said of his team-mate. “He always finds a way to deliver whatever our team needs to get a win and to me that’s the best thing that can be said about any basketball player.

“We had a tough loss on Friday and had a few guys get injured so coming out with a win with only 6 players able to play was great for us.

“With the injuries we have sustained in the last couple of weeks it’s important for us to stay focused on our game plan for those upcoming games and then go out and execute that plan.”

Worcester Wolves are the only side to defeat the Eagles this season and completed the sweep over their rivals with last Friday’s 88-81 victory.

“They are a good team and you have to give them credit,” said Martin. “They were able to disrupt us and get us out of our regular offensive flow.”

The Wolves have now won the last four meetings with the league leaders, including last season’s playoff final at Wembley. However, Martin inists their losing record against Worcester will have no baring should the two teams meet again in the playoffs.

“I don’t think it gives them an edge,” he said of the season sweep. “We are a competitive group of guys so we would look forward to playing them again if we get the opportunity.

Martin, who hails from Valparaiso, Indiana, is one of many threats that the Eagles possess offensively and he currently averages 13.8 points per game and just under 7 rebounds.

On two occasions this season, Martin has recorded career-highs of 28 points in the BBL with a total of 442 points coming in 32 games.

“It’s great to play on a team, that when healthy, is as deep as ours,” he said. “It definitely takes pressure off of the individual and allows everyone to play more free and relaxed.”

The 26-year-old had a prolonged college career spanning six years having been hampered by two serious knee injuries, whilst also transferring from Purdue to Notre Dame.

Now in his second season as a pro, both with Newcastle, Martin believes he has just adjusted well to the league and has been happy with his contributions in the current campaign.

“I’m pleased with the way I’ve played this season mainly because I feel I’ve done my job of doing whatever the team asks of me well,” he said. “Offensively I have settled into my role well and am shooting the ball more consistently as the season has gone on.”

“My role is to be consistent on both offense and defense. More specifically to make my shots on offense and rebound the ball to help take some pressure off of our bigs.”

Additionally, Martin has been studying to obtain his Masters in Project Management at Northumbria University. That allowed him to participate in BUCS competition this year, along with Eagles team-mates Smith, Lasker and Darius Defoe and helped Northumbria claim their first Championship with a MVP performance in the final win over Durham.

“Winning the BUCS championship was our goal from the time we got together as a team and it’s always a great feeling to accomplish a goal.”

Newcastle have already claimed two pieces of silverware with success in the BBL Cup and BBL Trophy finals to move halfway towards another clean sweep. However, the mindset has been the ‘one game at a time’ cliche, and Martin insists the team are only thinking about their next game.

“It would be a great accomplishment, of course, but first thing we need to do right now is get a win on Friday against Leeds.

“It’s been a very focused and hungry team this year,” he added. We had some lofty goals at the beginning of the season and have really worked hard to accomplish them.”

And Martin also reserved special praise for the dedicated supporters on Tyneside.

“The support of our team is amazing, he said. “We do have the best fans in the country and their support really helps especially on the road when we may be losing momentum and they just get louder.”

The Eagles fans know what it’s like to see their team win trophies, and certainly won’t mind a few more causes for celebration over the coming weeks.