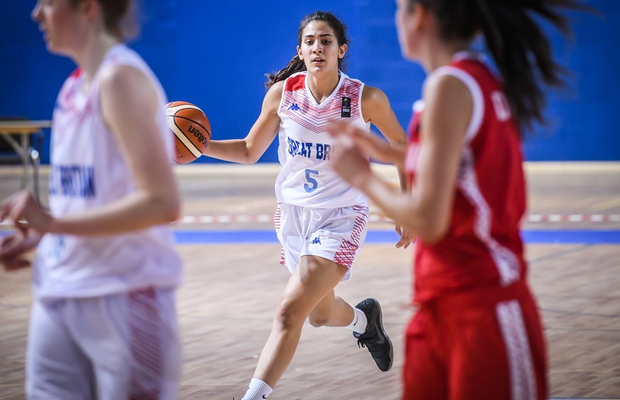 It’s been almost three years since Great Britain’s Under-18 Women were on the brink of promotion, yet the pain of coming agonisingly close still remains raw.

A talented roster comprising the likes of Holly Winterburn, Charlotte Ellmore, Shauna Harrison and Dani Lozzi made a momentous start and were looking to lift their side into Division A.

However, the quick-fire nature of a junior European Championship does not allow you to get caught in the moment. The euphoria of winning a quarter-final and being a win away from a medal, quickly transpired into devastation within 48 hours following back-to-back defeats. “Both were really emotional losses, but the Poland game in particular was heartbreaking,” Lozzi revealed in an interview with Hoopsfix. “After the Germany game, we knew we still had a chance of promotion so we couldn’t let ourselves dwell on the semi final loss. But the Poland loss hurt bad.

“Losses always suck, but it hurt even more knowing we had come so close to promotion yet just missed out.

“I think the difference in that game was that Poland were fresher whereas we were just exhausted. We had worked so hard to get to the promotion game that I think by the time we got there we had nothing left to give.

“The fact that people at home didn’t expect much from us and instead we came 4th was definitely a reminder that you have to back yourself when others don’t and you have to be your biggest fan.

“It was also a testament to how important hard work and team work is, as both were definitely the keys to our success.”

Roar of the crowd

While GB can often accumulate big miles playing across Europe, this time they were a little closer to home with Ireland’s capital city of Dublin playing host to the Division B tournament.

And, it was the intense buzz inside the National Basketball Centre that stands out upon reflection for Lozzi.

“The thing that stands out to me most about this tournament was the arena,” she said. “It was small, green and packed with Irish fans.

“When we played Ireland, it was so loud we couldn’t hear anything over the roar of the crowd. That was a pretty cool atmosphere.” GB were unable to silence the home fans on that occasion with a 63-49 defeat ending a three-game unbeaten start over the first three days of the competition – marking the first blip on the road.

Meanwhile, the hosts would continue to push on and they secured a historic promotion by overcoming Poland, 67-58, in the semi-finals before taking silver with defeat to Germany in the final.

Opening with a 33-point third quarter blitz to provide the platform for a comeback 80-63 success over Ukraine, GB then blew out Moldova with a 148-28 victory before beating Macedonia, 81-46. Confidence grew amongst the group following each result and expectations began to be lifted, even though promotion was not initially a target

“We came into tournament wanting to do well but after the first game, I think we realised just how talented we were and how far we could go.

“It was still a game-by-game approach, but once we saw we could compete with the best, we set our eyes on promotion.

“Winning those first three games was crucial. Starting off so strong set a great tone for the tournament and it obviously set us up well for the next round.

“In terms of the Moldova game, having all 12 of us get onto the scoresheet was a nice individual confidence boost and it helped everyone feel integral to the team’s success.”

Lozzi’s all-round game was on display throughout the tournament as the tenacious guard consistently filled the stat-sheet in multiple categories; finishing with averages of 6.0 points, 5.5 rebounds, 4.6 assists and 5.1 steals per game.

Nine points, seven rebounds and three assists to accompany eight steals in the tournament opener provided a strong foundation for Lozzi. And, it was in the steals department where she really made her mark; collecting 41 in total to lead the field in Dublin, whilst also setting records in both steals and assists for a British player at an Under-18 European Championship.

“To this day, this is one of my greatest achievements in my career,” she said. “As a defensive specialist, finishing as the tournament leader in steals meant so much to me and allowed me to assert myself as one of the best defenders in my age-group.

“Coming second in assists, too – both titles gave me validation that my hard work was not going unnoticed.

“I have always loved to facilitate and I get a lot of satisfaction out of setting my team-mates up. We clicked as a team, and having a great team around me that were shooting the lights out made my job much easier.

“As captain, and one of the oldest girls of that group, I’d like to think I also brought leadership and maturity, especially when it came to the latter stages of the tournament.”

Focus for the future

Lozzi previously represented England at the Under-16 European Championships in 2015 with the experience an almost complete contrast in terms of results against superior nations in Division A.

It marks a trend in British junior teams failing to consolidate their place amongst the top-flight, something that Lozzi insists should be more of the focus.

“I think that was eye-opening in that it showed me the standard of the top teams in Europe,” she admitted of 2015. “I think it made me realise how every year our goal is ‘promotion’, but we should also focus on how to stay in Division A once we get there.

“Too many times we see teams get promoted then immediately drop back down to Division B the next year so we should focus on longevity and consistency at that level.

“By competing against these top teams every year, we would definitely see remarkable growth as a nation.”

Lozzi will embark on her senior year in the States at Lynn University later this year, playing alongside fellow Brits in junior Loie Webb and incoming freshman Alex Baker.

With no European junior action this summer, we are looking back on the British Basketball age groups, starting with the Under-16s; featuring video action, all-time leaderboards, top performances and an All-Decade Team.