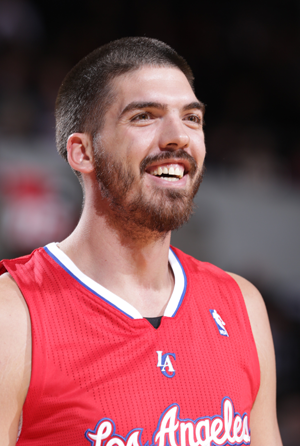 Los Angeles Clippers’ Byron Mullens has said he still intends to suit up for the Great Britain Senior National Team “in the near future.”

The 24 year old has revealed the birth of his son is what caused him to miss national team duty this past summer, but he has no doubt he will end up pulling on the GB jersey at some point.

“Yeah there are definitely plans, I was planning on playing over the summer at Eurobasket, but my boy was born,” he said after the Clippers beat Sacramento on Saturday night.

“I really wanted to play but I felt I had to be there for his first birthday. Everything just didn’t pan out, I was still a free agent, and hadn’t signed with the Clippers yet, so it didn’t quite work out. However, I really am looking forward to playing in the near future.”

Mullens, who got a British passport in 2012 due to his English mother, was a no-show at training camp last year with the official reason being ‘a lingering toe injury’. However, he was seen by journalists in Charlotte working out and appearing injury free.

Mullens was drafted with the 24th pick in the 2009 draft by Dallas, who immediately traded his rights to Oklahoma City, where he spent two seasons before being traded to Charlotte for another two seasons, and then earlier this summer signing with the Clippers.

He is averaging 3.3 points and 1.7 rebounds in 9.1 minutes per game so far this season.