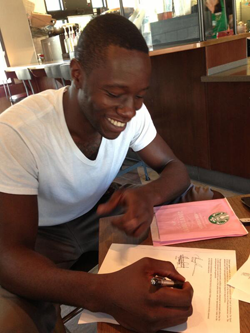 The 24 year old has just graduated from Loyola Marymount University where he averaged 12.9ppg and 7.1rpg in his Senior year, whilst helping them to the WCC Tournament Semi-Finals.

“It wasn’t a hard decision to make, it’s Italy and the top division out there,” said Hamilton when talking to Hoopsfix. “I feel honoured that they took an interest in me and am extremely excited to get there. I hear Pesora is an amazing city with great fans.

“It’s amazing (to sign my first pro contract). I’m getting paid to do something I would do for free. I love the game and this has always been a goal of mine. I have a really good team that I work with and has helped me reach this point.”

The 6’7″ wing has been regularly named to Great Britain Senior Men preliminary squads, and played in the Division B European Championships as an Under-20.

An injury forced him to withdraw from GB’s campaign this summer as well as miss out on an NBA Summer League call up with the Sacramento Kings.

“I had an issue I was playing through my last few years in college, it was never really addressed and without being able to rest in the summer doing constant workouts for NBA teams put me on the shelf for the while,” he said talking about the injury. “The rest has been good for me mentally I’m excited to be 100% going to this new opportunity.

“I think my role will be determined as I get there and meet my teammates,” he continued. “But I score, rebound and defend from the wing position. I’m just trying to help us get some Ws and a chip.”

Hamilton was sitting on a number of other offers, with Eurobasket.com reporting that he was close to signing with PGE Turow in the Polish TBL.

Hoopsfix wants to wish Ash all the best with his professional career!