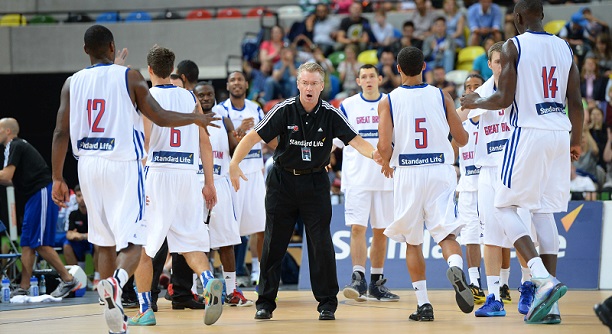 Great Britain Senior Men started their summer campaign with a win, defeating Puerto Rico 61-55 at London’s Copper Box on Sunday afternoon, giving the team a welcome confidence boost as they prepare for Eurobasket 2013.

Despite Puerto Rico fielding a second team, it was by no means an easy victory, with the game’s outcome not sealed until a dagger three pointer from Kyle Johnson gave the home side a ten point cushion with a little over a minute to play.

New head coach Joe Prunty was happy to get the first win under their belt but warned they are far from being a finished product.

Kieron Achara was named the game’s MVP, flirting with a triple double as he finished with 13 points, 11 rebounds and 6 blocks, but it was perhaps Andrew Lawrence, the floor general from Surrey, who turned the most heads.

“It was good to get our first game under our belt, obviously we’re happy with win,” Lawrence said, as he had a 9 point, 3 assist, 2 steal stat line, controlling the floor in his 18 minutes. “There’s gonna be a lot of things we’ve gotta go back and correct now, but like I said, we’re really happy with the our first win and in our first game we can’t really ask for too much more.

“We made a few mistakes, sloppy turnovers, stuff of that nature but that’s expected in your first game you know. We just gotta keep keeping better from here, but overall with that win everyone’s confidence is just boosted to another level.”

Meanwhile Drew Sullivan, in his eighth year with the programme, was happy with the fighting spirit shown by some of the younger guys.

“There was no moment that we put our heads down, we got right back into the fight and I think that says a lot about guys coming through,” the Leicester Riders forward said. “Obviously when you look at the team, especially the starting 5, we’re quite young, we’ve got Andrew, Kyle in the backcourt, and there’s a lot of young guards on this team; all the experience is in the front court – with that being said I feel like they did a really good job of handling the pressure.”

Sullivan added 10 points, 4 rebounds and 4 assists, Kyle Johnson had 11 and Eric Boateng pulled in 10 rebounds with his two blocks.

GB will now face Puerto Rico again on Monday in a closed door game, before flying to Helsinki to play Finland on Thursday.

Did you watch the game on live stream? Thoughts?