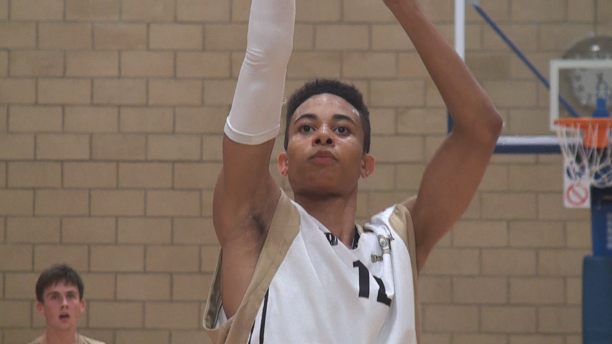 England Under-16 and Barking Abbey product Josh Steel has been selected to participate in this year’s prestigious Jordan Brand Classic International Tour.

Steel, a 1997 born guard/forward, represented England Under-16s a year young at least year’s Division A European Championships, averaging 3.6 points, 3.3 rebounds and 1.2 assists per game, and was also a part of Great Britain’s bronze medal winning team at the Australian Youth Olympic Festival earlier this year. He will be the sole British player at the camp, after the UK having three and four representatives at the last two camps.

The seventh annual European basketball training camp featuring the top 40 Under-16 players throughout the continent will move away from England for the first time in three years, and instead be held at FC Barcelona’s Ciutat Esportiva Training Facility in Barcelona, Spain from March 1-3.

The three-day camp will feature the top 40 players throughout Europe who will compete over two days to earn a spot in the International Game at the Jordan Brand Classic this April. Only the ten best 15-16 year olds from the camp will join the team in Brooklyn, along with eight other players who will be chosen at a later date from around the world. The complete Jordan Brand Classic International roster will be unveiled in April.

“This will mark the seventh annual European skills development camp and we are thrilled to host the event in Barcelona – the site of one of Michael Jordan’s greatest moments as a member of the 1992 USA Basketball team,” said Larry Miller, President of Jordan Brand. “Each year we host dozens of elite players and this year we will be at one of the premier training facilities in the world — all while giving these great athletes an opportunity to travel to the United States to play in this year’s Jordan Brand Classic International Game.”

The first and second day of the basketball camp in Barcelona will focus on strength and conditioning training sessions as well as skills instruction with star coaches from both the U.S. and Europe. The final day of the camp will be highlighted by an all-star game featuring the top 20 players, as chosen by the coaches.

The 10 Most Valuable Players will be chosen at the conclusion of the European camp to represent their countries in Brooklyn on April 13 in the Jordan Brand International Game, before the nationally televised Jordan Brand All-American game later that evening.

Jules Christian and Kenroy Wood are the only British players to make the roster for the Jordan Brand Classic International Game in the US.