Last year UCLA Bruins made headlines for losing the first game of the season to a smaller conference team.  A team whose last victory against the Bruins was in the 1941-42 season and hadn’t beaten them in a dozen tries since.

UCLA, then ranked No. 17 in the preseason Associated Press poll, came across a determined Loyola Marymount Lions team who defeated them by a score of 69-58.

Leading the way for the Lions was London’s Ashley Hamilton with 23 points.

“I’ve played in big games before,” said Hamilton after the game. “I played for my national team and we played in big buildings and big programs before. I just felt like I had to stay calm and be aggressive.”

The 6’7” forward has represented England in the U-18 category and was a top scorer for the Great Britain U-20 squad that made it to the quarter finals of the European championships in 2007. Hence as an upperclassman he had experience under his belt and it was just a matter of putting it all together for a great start.

Unfortunately, two games later, Hamilton suffered a broken foot that caused him to miss twelve games. He had just been named the West Coast Conference player of the week so it was understandably a big setback to a promising season.

“I worked really hard to be ready for the start of last season and, the first two games, everything seemed to come naturally,” said the business major. “It was just bad timing and bad luck the injury happened [in the] third game.” 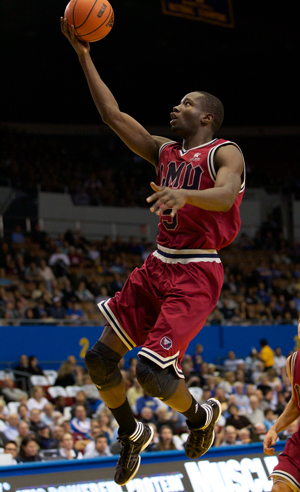 In college basketball, it is desirable that a player should have his best game at the end of the season, where championships are won. Hamilton’s most outstanding game just happens to be his first. He never scored twenty or more points in any other game and finished the season with averages of 11.1 points and 5.5 rebounds. Solid numbers he should be able to build on in the coming season, of which his coaches are enthusiastic about.

According to Associate Head Coach Myke Scholl, “Ashley has really grown in his four, going on five years, here at LMU. He is the fourth player in the last four years to earn his undergraduate degree and begin his masters while still playing for our program. He has worked hard to put himself in this position. He has battled through injuries and we are excited to see what he can do as a fifth year senior.”

Hamilton, who redshirted his first year at LMU due to an injured back, wants to be a leader on and off the court. That’s why he spent the summer, not only earning his degree but also working diligently on his game.

As for his game, he doesn’t model his play after any one in particular but is lucky enough to be based in Los Angeles where he can see Kobe Bryant and Dwight Howard play. The former being one of his favourite players and the latter he admires for his “smooth” post moves.

“It is important we play as a group and understand what our roles are,” he said. “For me, I want to be the best leader I can be. I want to work hard to fulfil the potential I have been showing in spurts before injuries. I need to be consistent and max out my potential and lead them far.”

The Lions won 21 games last season, the most since the 1989-1990 season, according to CBS Sports, which makes one wonder how many more they would have won if Hamilton had been healthy all season.

Point guard Anthony Ireland, an all conference first team selection, last season, is back for his junior year and is expected to form a formidable duo with Hamilton.

“We’re quicker, faster and more talented than we were last year,” Ireland told CBS Sports. “Last year’s team was smarter, but we just need to mature and get experience together.”

In the mean time Hamilton is very thankful for his experience at LMU where he has learned a lot. “One of the great things about LMU is the people, and I have had the chance to meet so many, ” he explained. “They have really helped me grow.”

Both on and off the court, it looks like Ashley will be just fine.