With the GB U20s starting their campaign for promotion tomorrow at the Division B U20 European Championships, we’ve called upon Duco van Oostrum, who will be in Sofi, Bulgaria, following the team, to bring regular blogs on the team. In his first one, he previews the side and competition…over to Duco.

Most Great Britain basketball attention this summer will obviously be focused on that tiny occasion down in London. But it’s also a summer of national team action just like any other year, which means the U20s will be in action first, as always, then it’s U18s, and finally U16s. For the true aficionados, it is the usual summer of FIBA live-stats.

For the 4th year in a row, I will be at the U20s championships and write my little blogs from there. Hoopsfix has agreed to publish them this year. I’ll be leaving tonight, and hope to arrive in time for the first game v Portugal, Thursday 1.45pm local time.

One of the reasons I’ll be doing this—  and I started writing these blogs at the U16 championship in Portugal all those years ago — is because there is so incredibly little publicity about youth national teams, or even basketball, here in the UK. Publicity seems to be a dirty word. If it weren’t for Hoopsfix, what useful publicity would be there?

Most of the official UK sites bring out news events on strategy, organisation; the main protagonists of basketball appear to be the men in suits, according to those publications. Players and coaches hardly feature, in particular in the youth groups, but even at senior level, it’s hard to find the players’ stories. Compare this to other sports reporting and it’s as if basketball wants to hide its success stories — the players and the teams.

I’m still absolutely stunned that the massive achievement of the U16 boys’ promotion last year to Division A received so little official recognition. Outside the UK in the basketball world these players and coaches are recognised for that historic achievement, but here, it’s silence — or, it’s an emphasis on the strategy in place that has led to this success.

What about the players and coaches? To me, these are massively missed opportunities for the promotion of the sport in the UK, the so-called legacy that even these players can already give to future stars. These young players should be role models for the achievement of representing their national teams. It’s what players should aspire to and they should want a piece of the action, wanting to work even harder to be a better player. It then isn’t helped by forum style comments that then actually turn against those who represent (the infamous modern day ‘haters’ who suddenly have a publication platform).

Once in a while there is local newspaper doing a story on a player making the national team (there’s a really nice one on Rema Lascelles now, for example), usually tipped off by school or dad. But everything’s local, secretive, and ready for stirring up controversy.

By comparison, have a look on the Spanish federation website and look up national age group teams. Players’ diaries, pictures, stats, previews, etc (http://www.feb.es/inicio.aspx?tabid=92). OK. So we might not have the same tradition as Spain, but they haven’t had that forever either. It is my contention that good publicity for basketball, genuinely player and coach focused — the ground work — would be worth more than yet another ‘basketball development officer’ (in fact, it would make their jobs a lot easier). So much for my preamble.

Who are the lucky 12 at U20s this year? Go to the official GB website, and one day before the tournament, you won’t find out. I just checked and announcement has just been put up; I guess they just beat me (Duco submitted this about 10 minutes after it was published – Ed). But go to the U20s players page page, and you will see some players with pictures, others with logo, a tab for a ‘blog’ which isn’t there, lacking info, more than 12 players and one missing.

Luckily, there’s the official FIBA U20 site (bookmark now: http://u20men.fibaeurope.com/enDivB/) and from tomorrow you will have the final 12, all players ‘clickable’ with basic info, stats, history, and if you’re lucky, some photos and specific articles.

The excellent website Europeanprospects.com has already done a preview of the tournament. Special attention to Group C, ‘the group of Death’, with powerhouse Croatia, Denmark, and Great Britain. The level at this year’s U20s B championship is unprecedented.

The ‘golden ’93 generation’ of Poland, the Bulgarian promotion generation, and the presence of Croatia make this tournament suddenly one of the tournaments to watch for basketball talent scouting across the world — there will be plenty of NBA scouts there as well as all the top European club scouts, for example. I’m really looking forward to seeing some top quality basketball and I hope to share that with you.

The Great Britain U20 team. As always, it’s also a story of ‘who isn’t there.’ To me, that question is related to how we celebrate our youth national teams, but it’s also one of individual career over national team duty, injuries excepted. The ones who are here matter. They are the ones adjusting to different roles, different coaching, and putting their game out there on a national scene. It’s a great opportunity, but for some, also quite a risk. When it all comes together, and this year’s quality tournament is something to behold, it’s the opportunity for the players and the national team to have an amazing competition and experience.

All these players have basketball stories already and have experience with the national team, journeying in their individual careers, battling injury, disappointment, and fighting against the odds to be able to make these final 12. 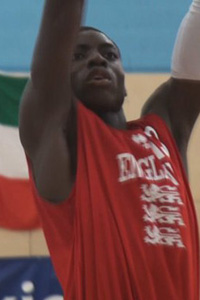 For Connor Washington, it’s the reward for all those years of sticking with the national team; for Jesse Chuku (pictured, right) and Joe Hart, it’s the return after career-threatening injuries and a start before a new basketball life at University; for Zack Wells, it’s the start of something big for the very big man.

There are old friends from the ’93 group who have gone separate journeys of basketball. Many play in different countries: Joe, Rema, Jesse, Ali, Grant in the US; Josh, Joe (from next season) in Canada, Lee in Scotland, Louis, Connor, John, Zack in England, Devon in Spain. For the first time with U20s, there’s an international coaching staff of two Canadian University head coaches, Smart and Campbell. And then there’s the steady figure of Mark Lloyd who sees one group of U20s come and then gets ready for the next lot.

I’m hoping to do a few profiles during the tournament so people get to know these players that represent Great Britain. And let’s not forget, there is a legacy to the Great Britain project now with Scotland and England having made the decision for the future that allows this project to continue—this team feature two Scots (Lee and Ali).

See you in Sofia.

As to basketball stories, it is only right to listen to the ultimate Basketball Jones.