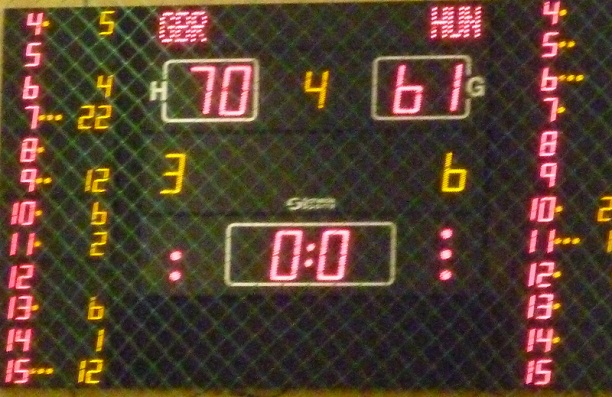 Duco van Oostrum checks in from Romania with his eighth blog of the Great Britain Under 20s’ 2013 campaign, looking at their tough win over Hungary in the semi-finals to secure promotion to Division A!

U20 European Championship B, Pitesti, Romania

The long awaited semi-final match carries with it innumerable storylines, mostly about frustration, missed chances, and whatifs. For quite of few of this 1993-born generation, the game brought back nightmares of the semifinal in Portugal at U16, when England had played an amazing tournament, only to get upset by the Danes. They did recover in the next match and wore their bronze medal proudly, but it hurt. For many years.

Now, after many attempts at GB U20 to get the programme clicking, amassing talent, setting up prep schedules, using multiple coaching structures, finally they’ve put themselves in position to put it all right. A few of the players also remembered last year’s disappointment only too well.

That year is described as a ‘failure’ even though they beat Croatia and had excellent chances there. At the crucial moment, they fell to a Finland team they should have beaten by double figures. What was also not forgotten that Croatia had to overcome a 20+ difference to go through in their next game, and magically that happened.

Hungary was of course the team that had played GB closest in the group stages and it had been an ugly, yeoman-like win, with terrible shooting percentages at both ends, and GB holding the fort for the final three minutes. Hungary had cruised past outsider Portugal in the quarterfinals and was looking forward to putting the hurt on GB once again.

I was worried. These games don’t come around very often, and it’s easy to fall prey to the occasion and to just let it all ride past. Game time.

Rowell jumped early on the tip and Hungary run the first offense. Zinkovits runs into the British wall that is called Zak who blocks the shot. Great Britain’s first offense is a coach’s dream, and leads to a Raph three from Devon’s assist. Here we go.

Big man (2.20m) Dobos gets the lay up, but GB answer with another three from tournament leader Joe Hart. A promising start. Quickly, however, a worrisome pattern emerges. Hungary grind out the points and for GB they become more and more difficult.

Devon just cannot get going, missing shot after shot. There’s another pattern. Hungary have decided to bully Devon, hit him whenever possible and ride him hard all over the court—and the referees seem to nod in agreement—they certainly didn’t blow their whistles for fouls for long periods in the game.

Markovich, Hungary’s Serbian leading scorer, puts them up 10-6. After two consecutive turnovers (offensive foul and getting pushed out of bounds), Devon shoots the gap on the next play and throws down an awesome poster on Markovitz, ‘and-one.’ Finally, maybe this will get GB going.

Hungary keep pounding away, though, and keep scoring, in spite of another Raph three-pointer, Hungary go to 17-12. What’s been so amazing about this GB team is their will to come back, and they do it again. Nick hits five points, John Stewart gets his three again, Lewis plays tough, Grant steps up in his limited minutes and gets hacked on the rebound, and somehow GB finish the first quarter 24-17 up.

The second quarter continues the GB scoring run with yet another open court Raph dunk from the Lewis dime, and Matthew Don also hits his Joe Hart’s three gives GB its biggest lead, 31-18. Time to breathe for the supporters, maybe. But no, the game turns ugly and the GB scoring is difficult.

GB only score from rebounds and put backs (Rowell) and Hungary put a run together, closing to four, 37-33, before Matt tips in the half-time score, 39-33.

Great Britain have a six-point lead in the semi-final, Devon just cannot get going, and GB are still fine, so why are we worried; it’s far from comfortable. GB have to work so incredibly hard for every score and every stop that this game certainly isn’t over yet. And we’re right.

Hungary continue the onslaught, and pounding away at GB they edge closer and closer. Devon goes to the bench after yet another driving lay-up in traffic with contact waved off, and here’s the first second-half lead for Hungary 43-41 on the Markovitch ‘and-one.’

It’s all about stops and heart, and GB fight back, Zak and Devon scoring for 47-43 GB. Even though GB has such a hard time scoring, the GB defense with Zak, Matt, and Raph, to name a few, stand strong and do a tremendous job keeping GB in it. A tumultuous few minutes where Devon produces two turnovers (and the entire crowd witnesses actually what happens) and misses another lay up leads to a Devon T for a minimal gesture. To put this into context, we’ve seen many gestures towards referees that were rather more pronounced, to put it mildly.

From 47-44 GB, the quarter turns and Hungary close it out to go up 51-49. What’s going on? The GB coaching staff is also pleading its case only to get threatened with expulsion. After three quarters of play, the most physical team in the tournament has racked up five fouls total—that is five fouls in thirty minutes of play. Did I mention it was tough out there?

Once again, Great Britain find themselves down in the fourth quarter. This is also the biggest game with so much history. Can they respond? The coaches remind the players, ‘we’ve been here before, don’t panic, play your game, and make stops.’ The message hits home.

Suddenly, Devon throws off all the frustration and makes big play after big play on the offensive end. At the defensive end, GB make a stand. Matthew and Zak deny everything inside and the outside is always a contest. Nick Lewis and Joe Hart make two incredible fast break stops, with plenty of contact to be fair, and GB are thriving.

The Romanian crowd shares some of the frustration in the game, and start whistling when Devon is literally hauled back to the ground mid-air and when he lands, the referee calls a travel. On the other end, the referee then notices Devon’s bloodied kit and wounds, and tells him he needs to sub. That pretty much summed it up.

Scoring is so difficult on both ends of the floor. GB end up with stop after stop but cannot score, with only Nick and a patched up Devon hitting free throws. The ten-point lead is secure because Matt blocks yet another shot and grabs the ball—did I mention no one got past him? Devon’s Eurostep lay-up make it 63-51 with 2 min 30 on the clock.

Game over. Huh, not quite. Kovacs hits a three. After the Hungarian time-out, they steal the inbound pass (actually, the ball was more a pass to the Hungarian) and close to 63-56 with 2 min 2 on the clock. It was a real déjà vu moment from the Poland game. GB cannot score and Hungary nibbles yet another two points from the lead and foul immediately—a bit of a clothes-line-tomahawk foul but apparently a play on the ball.

Only one from two free-throws and at the other end a massive block from Matt but straight to the top of the key to Kovacs who duly hits the gimme three—64-61 GB with 20 seconds to go and GB ball at the hash mark after the time-out. Devon and Nick (with four consecutive ones) punish the fouls and hit all the free throws to close out the game.

Kovacs does get an uncontested lay up opportunity after the beautiful inbounds play but it clanks against the rim and Nick plucks the rebound. All safe, especially since Raph steals the last ball yet again.Final score, 70-61 GB. 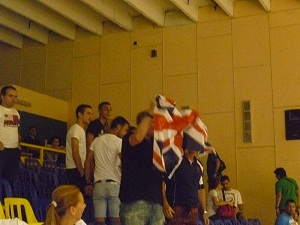 That fourth quarter summed up the Great Britain team. Devon overcame the horror of the first three quarters to unlease 14 points, including his only three. Great Britain rebounded and defended, Nick, Raph, Don, Zak, Joe, John, Rowell won battle after battle. It was something to behold—not many teams can overcome adversity as well as this GB team. Nothing easy.

The stats of the game confirm that this was not about ‘the beautiful game.’ Both teams shot 35% from the floor, with GB narrowly winning the rebounding battle (if you want to know how amazing that is, have a look at the heights of the Hungarian front line players), 49-46.

Even though GB scored only 70 points (they are the highest scoring team in the tournament), their defense once again kept an opponent in the 60s. Defense wins games.

An immense weight came off the entire team and coaching staff. Finally, they achieved that mission of promotion to Division A where they belong. The message was clear, however, one more game—there’s a big final v Poland coming up. Promotion and the final—mission accomplished for the fans, but the team want more. If it turns into a physical battle, Great Britain have got plenty of experience.