Great Britain Senior Men’s guard Devan Bailey started playing basketball at 11 years old with Helsby High School. He went on to play for Magic U14s as he progressed through the age ranks up to U18s, whilst representing England as a junior.

He then headed to the states to play at Brewster Academy before receiving a scholarship to attend NCAA Division 1 school Central Connecticut State.

The 6’2″ defensive stopper made a lot of people turn heads yesterday when he announced he will be leaving CCSU after just two years to turn pro. Hoopsfix managed to grab 10 minutes with him to have a chat.

Hoopsfix (HF):You’ve just decided to turn pro, leaving college early. The immediate question everyone is asking, is why? You had a free education, you were getting burn and now you’re talking about playing BBL? What’s the story?
Devan Bailey (DB): There where quite a few factors that led to my decision, part was the fact that being in college as a student athlete means you’re living on no money, or just money that you can borrow, and it got to the point where I didn’t want to live like that anymore. Also, I did have a limited role offensively, which I hoped would change in my Sophomore year but it didn’t. I’m looking at the BBL as a start since my stats aren’t great from college, just to show that I can do more than those figures show.

HF: Didn’t your scholarship mean you didn’t have any costs?
DB: Yes I didn’t have any costs, but just living, it became tedious. I was in prep school for 3 years prior to college and it obviously isn’t the only reason why I left, but I think I got to the age where I didnt want to have to rely on others to get by anymore 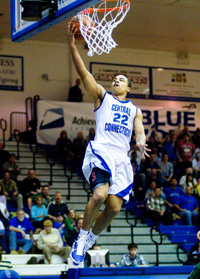 HF: How do you look back on your two years at CCSU? If you could turn back time would you have reconsidered the US college option?
DB: I think I had to go through it because it was something I wanted to do ever since I started taking basketball seriously. It was a dream that I had pushed and worked hard for, I was a little disappointed with the outcome but thats life, I wouldn’t change anything

HF: Do you have any interest from pro teams at the moment?
DB: Just a couple of BBL teams, and still looking into Europe but because of the little experience and other factors like lower stats it’s harder to get my name out

HF: What would you say to any young players considering the US college route?
DB: I would advise them to follow their dreams and be prepared to work your ass off. I think people underestimate the level of the US players and compare the UK national league to the states. Once you get to the college level, everyone can play, especially at Division; be ready to battle in practice everyday and fight for every minute.

HF: Moving on, you’ve just began GB camp, how has it been so far?
DB: It’s going good, we are practicing twice a day and everybody is playing hard preparing for the upcoming games.

HF: Are there any parts of camp you’ve found particularly challenging or particularly enjoyed?
DB: I’m just enjoying getting more experience, with great coaches and great players-the only thing you can do is improve. The most challenging part of it is the level of competition, things that you could get away with at college you can’t here and adjusting your game, but that is something I enjoy because it means you’re getting better.

HF: There is a lot of competition at GB’s point guard spot this year, how are you feeling about your chances of making the final cut?
DB: I’m trying not to worry about whether or not I’ll make the final cut, I’m just trying to concentrate on what I can do and hope that that’s enough. I am playing the 2 more and just trying to focus on my game and improving, over making cuts. 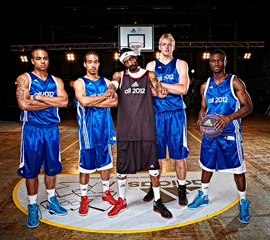 HF: You were also recently featured in the latest Adidas promo going 3 on 3 with Snoop, Warren G and Phillips Idowu-you lost?! What happened man?!
DB: Haha! Well, we were asked politely to go easy and it was more of a fun game, a pick up, light and enjoying the fact that Snoop, Warren G and Phillips had come out to help promote 2012 and GB basketball. It would have been nice for us to showcase what British basketball players can actually do but it’s an enjoyable start to what hopefully will be a great boost for British basketball.

HF-Any shout-outs?
DB-Obviously I give Hoopsfix a massive shout-out for aiding British basketball so much. My family, Mum and Dad John and Joyce Bailey, Grandparents Alf and Pam Bailey for helping me get this far with basketball, constantly driving me to practice and rebounding for me and my two brothers Luke and Alfie Bailey and Liam Johnson and Menelik Watson for giving me the belief that I could make something out of myself when others said differently. My high school coaches Paul Lever and Dennis Evans for properly starting me with basketball. Tim Lewis for giving me the opportunity as an under-16 to play for England and help me improve on the court. Kenny Roberts (old Manchester Magic player) who sent me to the US, and my coach Jason Smith (Brewster Academy) for basically turning me into a Division 1 caliber basketball player.